The Magician of Auschwitz by Kathy Kacer, illustrated by Gillian Newland 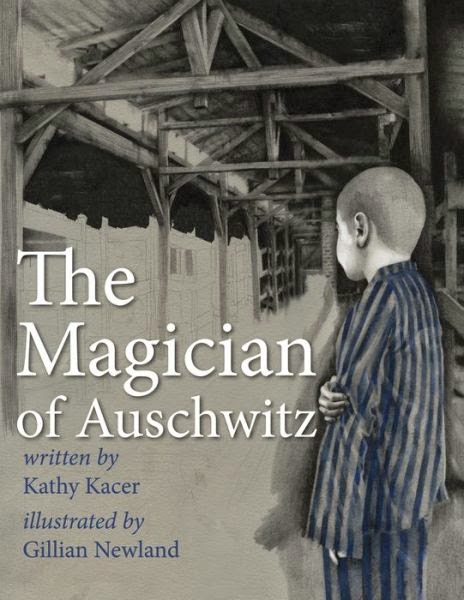 Werner Reich is just a young boy when he arrives alone at Auschwitz.  His father had died a few years before, he was separated from his mother when the Nazis took her and his older sister was supposedly hiding in plain sight with a Christian family.

Werner may be young but he quickly assesses that the best chance to survive Auschwitz is to appear not to be weak.  So, climbing up to the third rung of  the triple decker bunks in his barracks, scared and lonely, Werner meets his bunk mate, Herr Herbert Levin.

By day, Werner and the other men and boys stand hours for roll call, then move heavy rocks from one place to another, eat the watery soup and stale bread, then try to sleep so they can do this all over again the next day.

One night, however, the guards come in and wake Herr Levin up, demanding magic.  Giving him a deck of cards, Herr Levin performs all kinds of magic tricks for the guards entertainment.  His magic also delights Werner, who thinks Herr Levin might be favored with an extra piece of bread, but his thinking is quickly straightened out by his bunk mate.  "This is not a game and it is not a show…if I displease the guards, if I fail in my magic, if I run out of tricks, if they tire of me…my life will be over."  Werner quickly grasps the capriciousness of life in a concentration camp.

Then one night, Herr Levin teaches Werner how to do a card trick, one just for Werner only.  Magic helped keep Herr Levin alive in Auschwitz so far, maybe it will help Werner, too, he tells the boy.

Eventually the two are separated, and towards the end of the war, Werner is forced to walk on a Death March from Auschwitz to Germany, a walk he survives.  Herr Levin also survives, but the two have no idea what happened to the other.

Werner remained interested in magic throughout his adult life, performing tricks for his family and friends after marrying and migrating to the United States.  But he never found out what happened to Herr Levin until one day he was reading a trade magazine about magic…

and discovered that his Auschwitz bunk mate Herr Levin was none other that the renowned Nivelli the Magician, eminent pre-war magician known all over Europe and who, after the war ended, had been performing in the United States.

It must be so difficult to write books for young readers about the Holocaust that aren't too scary, too grime, too graphic, but istis doable and many parents and teachers find that they are a sensitive way to introduce the heinous circumstances of the Holocaust to their kids.  Canadian author Kathy Kacer, who has written many books for young readers about the Holocaust, seems to instinctively know how to make a Holocaust book accessible and informative without frightening young readers.  And she has done just that in The Magician of Auschwitz, a picture book for older readers.

What makes The Magician of Auschwitz such a fascinating story it that it shows so clearly how one small act of kindness can make such a difference in a person's life - in this case, maybe even helping to save it.   The themes of hope and friendship forbidden in a place where often it really was (understandably) every man for himself are reflected in the muted, subdued illustrations, almost as though they are being hidden from the Nazi captors.

The watercolor illustrations by Gillian Newland are indeed dark and foreboding grays, blacks, browns and gray-green, reflecting life in a concentration camp, with only small touches of red on the playing cards and the swastika on the guards armbands.

Though based on the experiences of the real Werner Reich and Herbert Levin or Nivelli the Magician, however, this is a fictional retelling of their story, told from Werner's point of view.  As a biographical picture book for older readers, there should have been more souces in the back matter than just the author's one extensive "How it Happened" explanation.  However, readers will still enjoy reading this and seeing the accompanying photographs of Werner as a youth and as an older man.  Sadly there is only one photographs of Herr Levin and his wife.

You might find the trailer for The Magician of Auschwitz by the author of interest:

This book is recommended for readers age 7+
This book was obtained from the publisher
Posted by Alex at 10:44 AM