Seeds of Rebellion: The First French and Indian War by Teresa Irvin 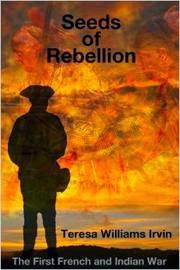 It's 1755 and life is difficult enough living on a farm, but for Josh Bedford, 13, life is made even more difficult with an older brother, Matt, who tortures him and a father he never seems to be able to please.  But then, Matt lets him take the blame for forgetting to lock the barn door and letting the cow get loose.  The cow ends up butchered and Josh ends up getting lashes from his father.

Still in the throes of anger, it's not surprisingly that when his adventuresome hero, Uncle Harry, shows up shortly afterwards, Josh decides to run away.  Josh stows away on the wagon his uncle is driving and eventually ends of at Fort Cumberland, where British Redcoats, rag-tag colonists and Native Americans have gathered as they prepare for war against French and other Native Americans.

Sneaking away from his uncle who is still unaware that he has run away, Josh changes his name to Jed and ends up finding work with Daniel Boone after almost getting them both killed by a bear.  But Josh/Jed also makes a friend in Oliver Cunningham, a 15 year old from Cork, Ireland who's a fifer for the British.

After Daniel Boone is sent to Winchester, VA to get supplies, Josh/Jed finds himself working as a groom for Captain George Washington until Boone returns.  All the while he must watch out for his uncle, knowing Harry would be forced to take him back home.

Hanging around camp is good, but eventually they must pull out and while on the move, war catches up with them when they are attacked by the French and Native American soldiers.  From his vantage point, Josh/Jed witnesses the massacre that follows.  Suddenly Uncle Harry's adventurous life doesn't look so appealing to this young boy.

Josh learns some valuable lessons in the 2 1/2 months he lives with the men involved in what came to be known as the first French and Indian War.  His father had always accused Josh of being unreliable at a time when it was often of life and death importance, but from Boone and Washington, he learns the valuable of being reliable and the satisfaction of a job well done.  From Oliver, Josh learns the true meaning of friendship and the importance of forgiveness.

But the war, the slaughter of people he knew and walked among, leaves Josh a very different young man than the child who ran away.

Teresa Irvin's Seed of Rebellion has its roots in a letter written by her 4X great grandmother describing some of the hardships she was facing on the family farm while her husband was away at Fort Cumberland with Captain Washington.  As a result, she  has written an historical coming of age novel that for all its quiet narrative style really packs a wallop.  She pulls no punches in her detailed descriptions, so be prepared.

But that authenticity makes this a very interesting book to read because, let's face it, the French and Indian Wars a/k/a the Seven Years War, is a unit that is really brushed over in social studies classes and most of us don't remember much more than the name.  Given that, Seeds of Rebellion makes a wonderful supplement for any history class that is studying this period of American history.

Josh is a great coming of age protagonist.  Full of anger and self-pity that he isn't the favored son, he has lots to learn when he ventures out into a wartime world.  Yet despite the time and setting of the story, what Josh learns about the world is not so different than what all kids hopefully learn.

Email ThisBlogThis!Share to TwitterShare to FacebookShare to Pinterest
Labels: Coming of Age, French and Indian War, YA