A Family Secret by Eric Heuvel 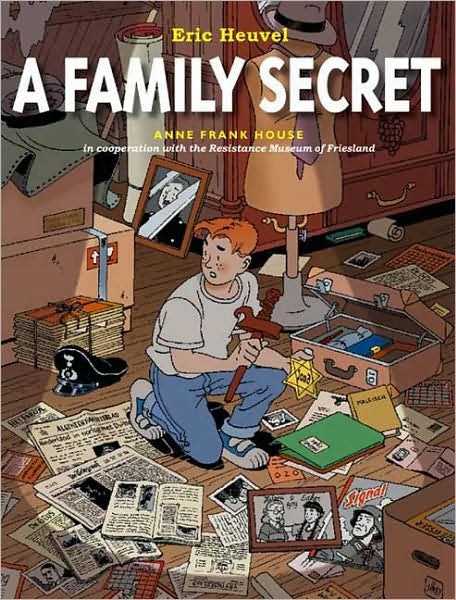 Eric Heuvel's first book, The Search, told the story of Esther Hecht and her parents during the Holocaust.  Esther was the only one family member to survive and she had moved to the United States after the war ended.  But she always wondered what happened to her best friend Helena Van Dort.  Although Helena wasn't a Jew, Esther never knew if she had survived the war or not.

In A Family Secret, the reader already knows that Helena did survive if the reader has read The Search.  But Helena has never spoken to anyone abut about that happened during the Holocaust in the Netherlands, and especially not about her friend Esther or her father, a collaborator.

Now, though, her grandson Jeroen wants to look in her attic for things to sell at the flea market to celebrate Dutch Queen's Day on April 30th.  Going through all the things that have accumulated in the attic, Jeroen comes across some old items from the 1930s and 1940s - a yellow star with Jood (Jew) on it, old newspapers from the 1936 Berlin Olympics, an old scrapbook of newspaper cutting from before and during the war, and an old photograph of two young girls - his grandmother and a girl named Esther.

Downstairs, Jeroen asks about these items and his grandmother begin to tell him about her experiences during the war.  In a series of flashbacks, she tells him about how, when the people in her building discovered that a Jewish family from Germany was about to move in, there was grumbling by some that the Dutch borders should have been closed to refugees.  But as soon as Helena meets Esther Hecht, the two girls become best friends.

As their friendship grows, Esther tells Helena more and more about how things are in Germany, beginning in 1933 when Hitler became Chancellor and started blaming the Jews for Germany's problems.  The more he blamed the Jews, the more anti-Semitic Germany became.  Laws were passed limiting Jewish activity and depriving Jews of their livelihood, their education, their privileges and their civil rights.  Luckily, Esther's father had a friend in Holland who sponsored their move to Amsterdam.

But when Germany invades Poland in 1939 and war is declared, everything changes in Holland, as well.  The Hechts try to flee again, but are turned back.  Helena's father had been a policeman, but when Germany invades the Netherlands in 1940, he begins working for the Nazis, even joining the Dutch Nazi Party.  Helena's brother Theo is also a strong supporter of the Nazis and joins the Wehrmacht when Hitler tries to invade Russia.  Her other brother, Wim, takes the opposite path and joins the Dutch Resistance.

On the day that Esther's parents are rounded up with other Jews, Esther is at school.  Helena's father is in charge of the roundup and tells Mr. Hecht he will wait for Esther to come home and bring her to her parents on the transport.  But, after an argument with Helena about what he has done, her father storms out of the house to look for Esther.

When he returns, he refuses to talk about what and Helena never knew what Esther's fate, whether she had died in the Holocaust or not.  Helena spent her life ashamed of her father's collaboration and always wondering about Esther.

Jeroen finally finds enough stuff to sell for Dutch Queen's Day on April 30th, and on May 4, he goes to see his grandmother again.  Helena had wanted to attend a Memorial Day Service, but she had sprained her ankle and so Jeroen goes in her place.

While there, a women tells about how she survived the Holocaust and during her story, she mentions her best friend Helena.  Jeroen recognizes parts of what she says and introduces himself to her.

And you know from The Search, it is Esther and she and Helena are reunited.

Just as he did in The Search, Heuvel doesn't hold back in A Family Secret, creating another graphic novel that is sensitive and dynamic but also factual.  There is really no surprise ending in either of the novels and, the reader knows from the start that the two friends meet again and even if you didn't read it, the ending of both novels is really predictiable.  What is interesting and important in these two graphic novels are the two different sides of the girl's experiences under the Nazis and the authentic information that Heuvel provides while telling Esther and Helens's stories.

Graphic novels have become such excellent vehicles for histocial fiction, and have evolved so much since they first gainted in popularity, making them a great way to introduce young readers to the difficult subject like the Holocaust.

Eric Heuvel is a first rate cartoonist but I believe that to date, A Family Secret and The Search are the only works of his translated into English.  His graphics are very clear and well done, and leave no room for ambiguity as to who is who or what time period he is depicting.  And the same translator of The Search, Lorraine T, Miller, has also once again proiduced an excellent translation from the original Dutch that totally supports the illustrations.

A Family Secret and The Search are two graphic novels that shouldn't be missed by anyone interested in the Holocaust.

There is a helpful Teacher's Guide PDF available for The Search, A Family Secret and Anne Frank: Her Life in Words and Pictures for use together or separately.