Friends of Liberty by Bernice Gormley 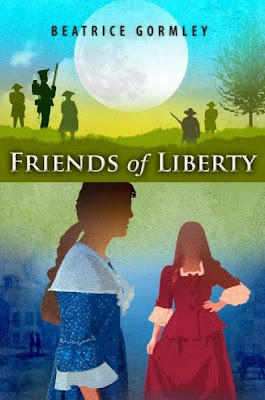 It is 1773 and tensions are heating up in Boston between the Tories, those loyal to the king and the Whigs, those who want American independence.   The East India Company was given exclusive rights by the British Parliament to sell tea to the colonists.  Though tea would be cheaper, the colonists were expected to pay the import tax on it.  But the colonist had no representation in Parliament and objected to being forced to pay the duty on tea.  The Sons of Liberty, a secret group consisting of shopkeepers artisans and tradesman who met at Boston's Liberty Tree, were vehemently against the tea tax.

Into all this, an unlikely friendship forms between 12 year old Sally Gifford, daughter of a shoemaker whose sympathies are with the Whigs, and Kitty Lawton, daughter of a wealthy merchant and a Tory.  To seal their friendship and become "sisters at heart" the girls exchange important token that remind them of their deceased mothers.  For Sally, this is a silver heart-shaped brooch studded with pearls; for Kitty, it is a gold mourning ring that holds a piece of the mother's hair.

Although Sally has a lot of chores to do at home, she still finds time to spend with Kitty, and begins to like the fancy privileged lifestyle she discovers in the Lawton home.  But one day, when Kitty's brother James comes home with tar on his clothing and a blistering burn on his neck, Sally is afraid that her cousin and her father's apprentice Ethan may have been involved in the incident.  After all, Ethan is involved with the Sons of Liberty and makes no secret of his contempt for the Lawtons and Sally's pretentious friendship with Kitty.

Now, as the ships from England bearing the taxable tea get closer and closer, tensions begin to climb all over Boston.  Sally, still dazzled by the Lawton's wealth and Kitty's subtle pressure to ensure her loyalty to their friendship, seems to be turning her back on her own family.  But when Ethan is captured by British soldiers one night during a raid on the Lawton's warehouse, Sally realizes that it was her fault he was caught.  But can she do anything about it, even with the help of Kitty's clever, scientifically-minded brother James' help?

Friends of Liberty takes the reader right to the Boston Tea Party, but does not include it.  The focus is really on the friendship between the two girls and how easily one can lose sight of what and who is important when blinded by the materialist luxurious life of others.  It is told from Sally's point of view in the third person and includes lots of descriptions about what the life of a young daughter of a well-respected, shoemaker might have been like.

As a historical novel, there is lots of information about the political unrest in Boston, though I think it presupposes some knowledge of the time period.  I believe that Friends of Liberty would, however, be a good companion book to read while studying the events leading up the the American Revolution.

I did have a problem with the friendship between Sally and Kitty.  Surely in all of Boston there were young girls in the same class as Kitty Lawton, that she wouldn't have to resort of a friendship with a shoemaker's daughter.  Class and political persuasion were important separators for the colonists and the King's merchant's.  Still, it does serve as a good example of a girl caught up in conflicting loyalties  and learning to be true to yourself, issues most kids must deal with at some point in their adolescence, even today.

Author Beatrice Gormley has an interesting, informative essay about life in Boston in 1773 over at EerdWord

This is book 4 of my 2013 American Revolution Reading Challenge hosted by War Through The Generations
Posted by Alex at 8:01 AM