The Bear Makers by Andrea Cheng 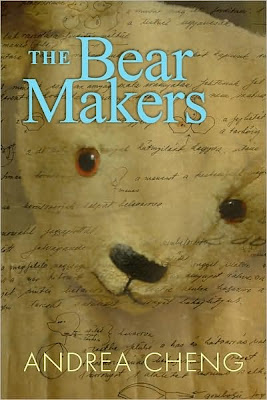 During the war, young Kata Steiner and her older brother Bela were sent to live on their aunt's farm in the Hungarian countryside under different names so no one would know they were Jewish.  When the war ended, the Steiner family were reunited in Budapest.  Their father, who had lost his factory under the Nazis, got it back and the family hoped  that life would now get better.

But the Steiners hoped in vain!

The end of war brought a very short period of calm but now in 1948, Hungary has been taken over by the communists and once again, there is fear of the secret police.  Now, instead of the Gestapo, it is the AVO (Allamvedelmi Osztaly) questioning people's loyalty to the Hungarian Worker's Party but with similar tactics.

And once again Mr. Steiner lost his factory, where he is now an employee, and his pay has been cut so much that he can no longer support his family.  Depressed, he takes to his bed for days at a time and even refuses to attend required party meetings, unless forced to by his boss.

Bela, who always used to play with Kata, is never home and when he is, he has no time for her.  Eventually, he goes in "an excursion" from which he doesn't return.  Instead, he and two friend escape over the border to Austria and freedom.

Despite the danger, Mrs. Steiner sits at her sewing machine all day and much of the night sewing teddy bears, and later purses, to sell on the black market and help support the family with the money she makes.  Any indication of capitalism, even just making bears and selling them, is a subversive undertaking, so it was imperative that no one finds out about it.

Kata, now 11, is  a smart, but immature girl, though she does well in school, and even begins attending Young Pioneer meetings with her friend and neighbor, Eva, despite being too young.  But Kata has been warned not to tell Eva anything about the Steiners, especially not about Bela's escape and her mother's sewing teddy bears.   The Steiners are convinced, correctly it turns out, that they are being watched by Eva's father, a staunch supporter of the Hungarian Workers' Party who would love to turn them into the oppressive AVO.

The Bear Makers is a story that disappointed a lot of readers because they felt there was not real story and no real denouement.  I read it as an interesting coming of age story set in a basically unexplored place and period in children's literature.   And while the ending wasn't all neatly tied up, there most definitely was an ending.

Kata is an extremely immature girl at the beginning of the story, but as events happen, she seems to develop more of an understanding about the danger of her family's actions under another oppressive regime.  That was evident when Kata was tempted to tell Eva what was going on in her family because she felt sorry for Eva, who had just opened up to her about her volatile home life and being forced to report to her father about anything she discovers in the Steiner household.  Torn between wanting to be Eva's friend and telling her what was going on in her home, in the end, Kata chose not to confide in Eva, sensing the danger if her did.

For me, though, the coming of age turning point begins when Kata makes the first name tag for one of the bears, much to her mother's chagrin, but later much to the delight of the buyer.  From than on, each bear leaves with a name tag giving it an identity.

The coming of age turning point culminated the night the AVO took her father for questioning and Kata finished a teddy bear for her mother, who simply went to bed in despair.  Up til now, Kata was innocent of any subversive behavior, but now, as a bear maker, she has crossed that threshold.

As for the denouement, the fact that Bela is going to America gives the family hope that he will send for them, and for the first time, Kata and her parents actually have a happy, hopeful evening together as they begin to learn English.

The idea for The Bear Makers was based on Andrea Cheng's grandmother's illegal bear making activity after WWII in postwar Hungary, also done to help support the family.  The picture of the bear on the cover is of a real bear she had sewn in postwar Hungary.  And each  chapter of The Bear Makers is headed by a piece of pattern used for making the bears.   These pieces of pattern seem to give the story its overall meaning: the fragmentation of the Steiner's both as a family and an individuals experienced under the Nazis.  As the pieces are sewn together to form the bears, the Steiners, too, are trying to piece their own lives back together again.

Or maybe I am overreaching.

Either way, I actually liked The Bear Makers very much, especially the historical background regarding Hungary.  I did knew that Hungarian Jews suffered devastating losses during WWII, but didn't know much about the post war years.  I think it would have been helpful to have an Author's Note at the end, to help put the story in context for its readers.  Cheng is, after all, a very prolific writer and people would naturally be drawn to her work.