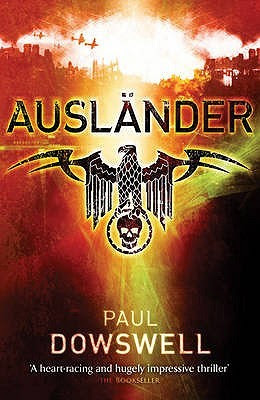 People of German descent, were considered to be Volksdeutsche (ethnic Germans living outside of Germany) by the Nazis, who wanted to bring these 'misguided wanderers' heim ins Reich (home to the Reich).

And that is almost exactly what Piotr Bruck is - a blond hair, blue eyed 13 year old Volksdeutscher, living in Poland, not far from the Russian border.  I say almost, because Piotr had a grandparent who was Polish, not German.  Left orphaned in June 1941 when his parents car got in the way of the German invasion of Russia, Piotr was put in an orphanage when the Nazis took over his family's farm.

But Piotr's luck changed in August 1941 when he was picked out to be adopted by a prominent German family from Berlin, mostly because of his perfect Aryan looks.  The Kaltenbach's already had three children - cold, distant Elsbeth, 20, Traudle, 13 and Charlotte, 8.  Professor Kaltenbach accepted Piotr, now Germanized to Peter, immediately, but the rest of the family was not so welcoming.  Nevertheless, Peter is enrolled in the Hitler Youth, and in school and even thinks about becoming a Luftwaffe pilot.  But it doesn't take long for Peter to become disenchanted with his new life.

He begins to spend time in the library instead of home.  At the library, Peter meets Anna Reiter there and soon the two begin to spend a lot of time together.  At first, the Kaltenbachs are thrilled - Anna comes from a good Nazi family and has the right looks.  But, as Peter discovers, all is not as it seems with Anna.  She and Peter begin to listen to the forbidden BBC  broadcasts.  Then he discovers that the Reiters are part of the resistance.  And before Peter knows it, he is also involved the resistance and helping Jews who are in hiding.   And to make matter worse, Peter discovers that Professor Kaltenbach, head of the Institute of Racial Studies, is involved with experiments being conducted on Jews.

It doesn't take long for the Gestapo to become suspicious of Peter and Anna's activities and when they inform Ptofessor Kaltenbach his Polish grandparent, he realizes he must give Peter up.  But Peter and Anna also realize they must get away.  But escape from Nazi Germany isn't easy for anyone, especially when the Gestapo is after you.  Can Peter, Anna and the Reiter's succeed in getting to neutral Switzerland?

Once I picked Ausländer up to read, I couldn't put it down.  It is a compelling, exciting, well written look at one boy's experience of Nazi Germany.  Though Peter's story is fiction, much of what he experiences is based on reality.  And because he is a Volksdeutscher Peter's story gives the reader a unique perspective, that of an outsider looking in.  After all, one of the translations of the word Ausländer is outsider.  Peter never fit in while he lived in Poland because he was of German descent, but he never fit in while living in Berlin either since he was always considered Polish.  Even though his German father was happy to see the Nazis arrival in Poland, Peter's half German mother didn't share her husband's enthusiasm.   And Peter wasn't brought up being fed Nazi dogma from a young age as the Kaltenbach girls were.  He had already begun to think for himself before going to Germany leaving him more open to seeing and assessing things from a different perspective.  Ironically, this began when he was disappointed by the constant physical activity demanded of HJ boys leaving little time for school and studying.

Paul Dowswell knows his history and has produced a fascinating, informed novel that offers an appealing protagonist and story at the same time as exploring a little known National Socialist policy.

This is book 7 of my 2013 Historical Fiction Reading Challenge hosted by Historical Tapestry
Posted by Alex at 7:04 AM

Email ThisBlogThis!Share to TwitterShare to FacebookShare to Pinterest
Labels: Coming of Age, Family, Friendship, Germany, YA