Alice at the Home Front by Mardiyah A. Tarantino 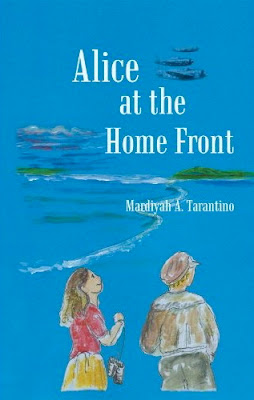 It is sometimes a serendipitous world.  Now sooner did I write about plane spotting in December, than I started reading a book about an 11 year old girl who really wants to be a plane spotter.  Alice Calder has memorized all the plane silhouettes on her plane spotting cards, has a brand new log book and a pair of binoculars.  All she is missing is her mother's permission.  But when her mom figures out that Alice has been plane spotting out the window one cold night in December 1942 in Providence, Rhode Island, she takes away her plane spotting equipment.  Now how will anyone be able to recognize her as the important spotter she fancies herself as?

Alice wants to do something more for the war than just writing to her Uncle David (almost) everyday. So the next day, after school, she heads over to the Red Cross, where she can fold bandages for wounded soldiers.  On her way, she envisions herself being introduced on the radio as a real patriot for her bandage folding.  Though is it satisfying enough work, Alice still  dreams of being a plane spotting heroine.

Then, as she and her Gramps are preparing a bomb shelter at home, Alice talks him into letting her use her grandmother's opera glasses (if it's OK with mom) and hits on the idea of joining the plane spotters in the Ground Observation Corps.  But when she asks Mr. Parker, the head of the corps, about joining, he tells her she is too young.  Taking pity on her, he gives Alice an old Ground Observer's manual that is still serviceable.

One day, after dancing class, Alice runs in her old friend (and crush) Jimmy Brownell, 16.  Over cokes, he tells her he has joined the Civil Air Patrol her and will be training to get a pilot's license.   In CAP, he will fly his dad's plane over the coast looking for enemy submarines.

Sure enough, Jimmy gets his license and begins flying and Alice flies with him, at least in her imagination.  Meanwhile, with hard won permission to plane spot, Alice does her patriotic duty spotting and keeping a meticulous log book.  But then, one cold winter night, a phone call comes, saying that Jimmy's plane was lost over the sea because of a nor'easter and it doesn't look good.  Upset, Alice passes out and spends a number of days in bed, seriously ill.

When she recovers, she is told that Jimmy had been found alive, but in pretty bad condition.  And to her chagrin, Alice discovers that binoculars and log book have been take away once again.  And that would seem to be the end of Alice's spotting days.  Or is it?  There is a big surprise in store for Alice and her meticulous log book.

Alice at the Home Front is a story that really demonstrates the desire of young people in WWII to do something, anything to help the war effort.  The war wasn't something far away on unimaginable battlefields to them.  They felt the effect of it wherever they lived.  Rationing, bomb shelters, air raid sirens and blackout were the kinds of things that brought it all home for them every day.  Tarantino has given the reader a picture into what it was all about for them through Alice.

Plane spotting was a big very big thing for kids and there were all kinds of ways to learn plane identification, including playing cards with images on them  It was something they could do right in their own backyard and maybe feel a little more empowered than they actually were.  And naturally, kids could get pretty competitive about who could identify and/or spot the greatest number of different planes.  And I suspect that lots of kids, like Alice, had Walter Mitty-like dreams be being a hero/heroine.  And it is part of what made Alice at the Home Front such a realistic novel.

This is a heart-warming story with lots of humorous bits, lots of slang and some pretty serious stuff, too.  I loved that she wanted to be a plane spotter, and really was dedicated to it, even at the risk of falling out the window.  The most amazing part of the novel was that a 16-year-old boy was allowed to fly a plane alone the way Jimmy did, but it certainly demonstrates how different times were back then.

Be sure to visit the National Museum of the Civil Air Patrol where you can see an extensive online exhibit of the role CAP played in World War II.