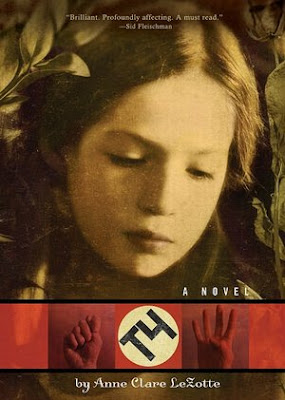 Paula Becker is 13, deaf and living in a small village in German when the Nazis pass Aktion 4 allowing them to do the unthinkable - "euthanize"disabled persons like Paula in their quest to become a master race and to eliminate the cost of caring for them.


T4 is a short novel in free verse told throughout in Paula's voice:

Hear the voice of the poet!
I see the past, future, and present.
I am deaf, but I have heard
The beauty of song
And I wish to share it with
Young readers...
...In T4, the facts
About history are true, and
My characters tell the story.


At first, Paula writes, the Nazis target only people living in institutions and she is left alone.  But in March 1940, the family's  priest comes to the house in the middle of a snow storm to tell them that it is now necessary to get Paula out of the house and into hiding.

The priest takes her to a woman named Stephanie Holderlin, where it is believed that Paula can remain safely hidden.  There, she is able to learn  the official sign language of the deaf.  But early one morning, the Gestapo knock on the door.   They had been informed that a disabled person was living there.  They search the house, but do not find Paula.  Stephanie finally manages to get rid of them, but Paula must be moved to another safe place immediately.

This time, she is taken to a homeless shelter run by a Lutheran priest.  There, she meets Homeless Kurt.  Gradually, he and Paula become friends and after a while, they decide to travel to Berlin together.  On the way, they discover seven people living in the woods, Jews who are hiding from the Nazis.  Realizing they cannot really make it to Berlin without being caught, they return to the shelter.

In 1941, the killings under T4 'offically' ended but it still wasn't safe for people like Paula and Kurt until the end of the war.  Unofficially, Paula writes, the killings continued.

When the war was finally over, the people responsible for T4 were tried at the Nuremberg Trials, with the exception of Dr. Philipp Bouhler, who was the head of the program and who committed suicide.

In its simplicity, LaZotte's story poem manages to convey some of the horror that Nazi Germany held for some people, but also some of the kindness that could still be found there among the people, reminding us again that not everyone was a Nazi and many didn't support their policies, like T4.

The author, Ann Clare LaZotte can well understand what it would be like to be in Paula's shoes, since she herself is also deaf.  She clearly feels very strongly about T4 and it shows throughout in her poetry. And she also knows more than a little something about German poetry: Stephanie Holderlin was named for Frederich Holderlin, a German lyric poet and two of the Jewish children that Paula and Homeless Kurt meet int he woods  are named for Nelly Sachs and Paul Celan, two of the greatest poets of the Holocaust and whose works I would definitely recommend reading some of when you have finished reading T4.

This book is recommended for readers age 9+
This book was purchased for my personal library.

More information on Hitler's T4 Program can be found here.