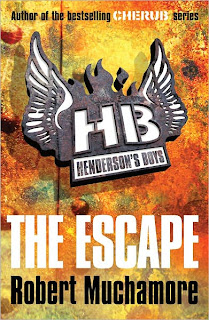 Robert Muchamore is the author of the very popular CHERUB series.  These are series books about the orphaned minors who are members of CHERUB, which stands for Charles Henderson’s Espionage Research Unit B, and modern day spies working with British Security Service.
The Henderson’s Boys series is a prequel to the CHERUB series and takes place during World War II.  It begins as people all over Paris are fleeing south before the arrival of Hitler’s Army, with one exception.  Marc Kilgour, 12, is an orphan who has just run away from the abusive orphanage he has lived his entire life in.  He arrives in Paris and finds what looked to be a very comfortable, abandoned house to live in.  That is until the Nazis show up and torture him for information about the real occupant of the house - Charles Henderson
At the same time, Paul, 11, and Rosie Clarke, 13, are pulled out of school by their father, Digby Clarke, a traveling salesman for the Imperial Wireless Company.  They are loaded into his Citroën along with stacks of papers and head south to Bordeaux to try to return to England.  On the way, the town they stop in is bombed by Nazi planes and just before he dies, Clarke tells the kids they must find Charles Henderson.
After the Nazis leave, Henderson returns home, finds Marc and after some very exciting adventures in Paris, these two also hit the road looking for Clarke and his children before the Nazis can find them and the papers Clarke has in his car.
The papers at the center of this story are the blueprints for a miniature transceiver designed by a French Jew named Luc Mannstein.  France and Britain were both a little wishy-washy about acquiring the plans even though the transceiver would have been a real boon in the war because of it portability.  The Nazis had a great deal of interest in it and promised safety in Poland if Mannstein would supply the blueprints to them.  But, Clarke now has the blueprints, so there is a pressing need for him to get out of France.
Henderson’s Boys: The Escape takes place over a short but crucial period of time during the fall of France.  Part One covers June 5, 1940 to June 6, 1940 and Part Two covers June 14, 1940 to June 15, 1940.  And France has been turned into a large, chaotic country for everyone, but especially for people who don’t know each other to find each other - Will the Clark kids and Henderson meet up?  And what becomes of Marc?
Henderson’s Boys: The Escape is a brilliantly written, graphically depicted, gritty, action-packed novel and no one is more surprised that I liked than I am.  I don’t usually like these kinds of stories, and yet, Muchamore’s novel held me spellbound.   It truly spares no punches, is at time brutal, has mild language and sexual references, and lots of violence.  It is not for the fainthearted, yet it really is no worst than many of the other  popular YA novels kids read.
Curious?  You can read the first two chapters and find out more about the Henderson Boys series here.