The Dog in the Wood by Monika Schröder 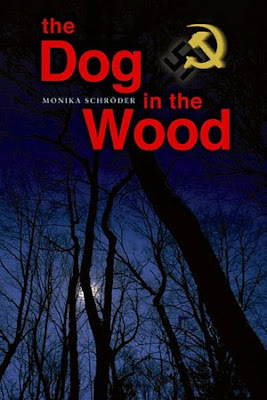 The Dog in the Wood is a realistic look at what happened at the end of World War II to one family, told through the eyes of a child.  As the Russians advanced, they left a trail of death, destruction and devastation generally directed at woman, children and the elderly in retaliation for Germany’s attempt to invade their country.  Schröder has taken these events of the war and written a moving account through the eyes of a 10 year old boy.
It is April 1945, the Second World War is ending and the Russians are advancing towards Schwartz, a small farming community in eastern Germany.  But the war isn’t officially over yet, and anticipating the Russian arrival, Grandpa has decided that he and his grandson Fritz Friedrich will fight to defend their land against the “Bolshevik enemy.”
Grandpa has always been a staunch Nazi supporter and had always believed the the war would end with a German victory.  But when it is announced on the the radio that Hitler had ‘fallen’ at the head of his troops, Grandpa knows the war was over and Germany is defeated.  The next morning, Fritz finds Grandpa and Oma Lou hanging in the barn, choosing death rather than defeat.
The Friedrich family, Fritz, his mother, older sister Irmi, and now Lech, their Polish laborer, decide to stay on the farm.  But soon the Russians do arrive, and two officers move in and use the house as their headquarters.  One, Mikhail Petrov, treats the family very kindly, even befriending Fritz.
After stealing and pillaging the Schwartz area, the Russians move on and the town begins to govern itself again under the communist system.  The Friedrich’s have their farm taken away to be evenly divided among new farmers and refugees.  The Friedrich’s are told to leave immediately and they, too, soon become one of the many refugee families trekking westward.
Arriving at Oma Clara’s house in Sempow, they hope to begin anew.  And at first, things seem to go well, but soon Lech and Fritz’s mother are arrested.  Oma Clara can’t get any information about them from the authorities and Fritz is faced with a big decision about what to do.
The Dog in the Wood was Schröder’s debut novel in 2009 (she has since written Saraswati’s Way and more recently, My Brother’s Shadow, my review here.)  Her writing style in the two books I have read is clear and straightforward with no words wasted or superfluous.  In this novel, she has managed to get across the revenge done by Russian soldiers as well as by some Germans themselves without being too graphic for young readers.
I thought it interesting that Fritz’s friend Paul, whose father is in a concentration camp for being a political enemy, is so aware of his father’s Communist dogma, whereas Fritz does not seem aware of Nazi dogma, despite his Grandfather. He is a very sensitive boy with a strong sense of right and wrong, who loves animals and gardening, but who is rather timid.  Yet as his world crumbles around him, he must try to find courage and strength within himself to overcome his timidity, and with the help of a true friend, to take matters into his own hands in order to find out about his mother and Lech.
The Dog in the Wood is a not to be missed, powerful coming of age story.
This book is recommended for readers age 11 and up.
This book was sent to me by the author
The Dog in the Wood
Monika Schröder
Front Street Press
2009
162 Pages
Posted by Alex Baugh at 8:10 AM