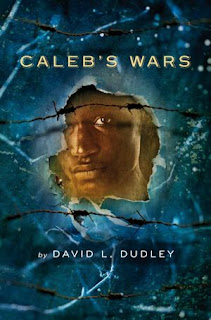 Caleb’s War is a home front coming of age historical novel set in rural during the spring and summer of 1944.  The main protagonist is Caleb Brown, 15, an intelligent, but angry, frustrated young African American man, and not without cause.

Things at home are sometimes not much better.  Caleb and his father often fight and his father believes his is teaching his son to behave by beating him with a leather strap on bare skin.  When his father whips him for fighting with some white boys, Caleb decides he can’t work with his father learning carpentry for the summer and ends up washing dishes at Dixie Belle Café, a restaurant he can’t eat at because it is for whites only.

Meanwhile, the town has received some German POWs to help in the fields since so many men are away at war and one, Andreas, is a trained chef and brought to work at the café.  Andreas and Caleb become friends; they are, after all, both considered to be pariahs by the white townspeople.  Or is this really true for both of them?

does an excellent job capturing the attitudes of white people towards African Americans ranging from condescending benevolence (the owner of the Dixie Belle Café) to unadulterated hatred (the Hill brothers.)  The feeling of fear, uncertainty and anger that African Americans lived with on a daily basis is palpable, and I read many passages with anxiety, thoughts of incidents of lynching, cross burnings, fatal beatings in the back of my mind. Yet, manages to find a way of getting things across without being so graphic that a young reader would put it down.

also creates some interesting parallels without sounding forced.  For example, while his beloved older brother Randall is off in fighting to defend not only his own country’s freedom, but also free others oppressed by Nazism, Caleb is denied many of the basic freedoms other Americans enjoy.  And around the same time that Randall is taken prisoner by the Germans, the previously hated, ostracized POWs, including Caleb’s friend Andreas, are allowed to eat in the Dixie Belle Café.

I started Caleb’s War with a great deal of enthusiasm, which remained right up until the last third of the story.  At the beginning of the story, Caleb and his friends are baptized, and while he is underwater, Caleb hears a voice saying “Behold my servant.”  He hears this voice more than once, eventually thinking it is the voice of God.  When he witnesses the pain caused by deformed, rheumatic hands that Uncle Hiram, an elderly black man also working at the café, suffers from, Caleb offers to pray for him.  Well, the next day, Uncle Hiram’s hands are straight and painless.

I thought about this element of the story a lot after I finished reading Caleb’s War.  Caleb is acutely aware of the injustices that surround and control the lives of southern blacks because of the Jim Crow laws and this young man’s war is with these laws and the people who uphold them.  And given the last episode and sentence of the story, I thought that without the miraculous healings, perhaps Caleb would become an early Civil Rights leaders/fighter and that was the meaning of “Behold my servant.”

After all, the name Caleb is probably not used frivolously here.  In the Bible, two years after Moses lead the Israelites out of ; he sent 12 spies out to determine whether or not they could safely enter the Promised Land. Ten came back and said no, Caleb, however, returned saying “Let us go up at once, and occupy it; for we are well able to overcome it.” (Numbers )  Um, shades of the Civil Rights anthem “We Shall Overcome” here.  At least, I thought so.

But the healings continue to confuse me; I simply don’t know what to make of them in this particular book, since they really go nowhere.  Any theories would be most welcome.

Caleb is a very likable character with a compelling coming of age story and I found I couldn’t put the book down, reading it in one sitting. This is for the most part an excellent book, and despite my reservations about the healings, I would highly recommend it.

This book is recommended for readers aged 13 and up.
This book was borrowed from the Webster Branch of the NYPL