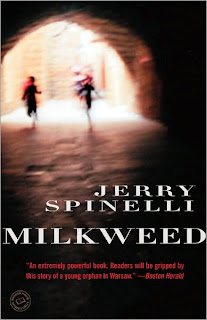 Milkweed is Jerry Spinelli’s first historical novel and he has produced a work that, in its simplicity, sent chills through me as I read. It is a novel about life in the Warsaw Ghetto through the eyes of a young boy, around 8 years old, who has no real identity and who does not possess any real social skills or knowledge of the world around him. Lacking these frames of reference, the boy misunderstands or draws incorrect conclusions about what he sees going on. He recalls nothing about his past, only knowing that he was given the yellow stone he wears around his neck by his father and that he is a gypsy. Because he is very small and very fast, he survives by stealing what he wants and running away with it.

The story begins in the summer of 1939 just before the invasion of Poland. The protagonist is running through the streets of Warsaw, clutching a loaf of bread he has just stolen, snatching it right out from under the hand of an older boy who was about to steal it for himself.

The older boy, Uri, chases him, and catching hold of him, breaks the bread in two, keeping half and giving half to the boy. Uri takes him to meet the other boys he hangs out with in a stable. Uri, however, lives in the cellar of an abandoned barbershop and brings the young boy back there with him, taking him under his wing. Eventually, Uri makes up an identity with a history for him, calling him Misha Pilsudski, a gypsy separated from his family when a bomb fell on their caravan. Uri and Misha live the good life in the cellar, with plenty of stolen food and a comfortable shelter.

When autumn 1939 comes, so do the Jackboots. Taken in by their massive procession into Warsaw and their shiny black boots, Misha decides he wants to be a Jackboot. In October, he meets Janina Milgrom after eating the last two tomatoes on her father’s plants. She invites him to her birthday, but not understanding what a birthday is, he thinks they are burning the cake when they light the candles. Misha steals the birthday cake and runs off it. After Uri explains birthdays, Misha steals the best cake he can find and leaves it for Janina at her back door.

Uri and Misha continued to live in the cellar of the barbershop, stealing what they need, until they were driven out in the winter of 1939-40. After that, they sleep in a different place every night, but continued to steal food and now coal, which Uri brings to the orphan home run by Dr. Janusz Korczak (the only real life person in this otherwise historical novel.) After seeing Uri do this, Misha starts to leave stolen bread and coal at Janina’s back door.

The following autumn of 1940, Misha witnesses another massive procession. This time it is Jews walking to the ghetto the Jackboots have created. In the midst of them, Misha finds Janina and her family.

Misha continues to steal, though by now everything is scarce, and discovers that he can slip undetected into and out of the ghetto. He begins to divide whatever food and coal he steals between Janina’s family and Dr. Korczak, also in the ghetto with his orphans. No longer with Uri, Misha starts to sleep in the Milgrom’s room, and in time Janina father begins to think of Misha as a son, and he becomes Misha Milgrom. Meanwhile, Janina has discovered how Misha sneaks in and out of the ghetto and she begins to go with him.

When deportations begin in the ghetto, everyone is transferred to concentration camps, including Janina and her father. Misha follows her, but is stopped before he can climb into the cattle car after her by a Jackboot who turns out to be Uri.

In the summer of 1943, the Warsaw Ghetto was completely liquidated, but this is far from the end of Misha’s story.

In an interview for TeacherVision, Spinelli says that he used Misha’s character as a way to retell a known story in a new way, while at the same time it presumes that the reader has some knowledge of Holocaust events. Misha’s lack of understanding allows him to give a unique perspective to what is going on around him. For one thing, it shows how easy it was to be sucked into the outward glitz and glamour of the Nazis without any real understanding of what they were attempting to accomplish. The shiny black boots worn by them blind Misha to their actions – he wants to be one to have the boots, not really understanding that they want to annihilate an entire race of people. It makes me wonder how many children this happened to. When he sees Jackboots cutting the beard and peyos, or sideburns, of an orthodox Jew, he suggests they bring him to the barbershop where he lives with Uri to do it; he has no understanding that an orthodox Jewish man is forbidden to cut his facial hair according to the Torah and what is being done to him is a humiliation and an insult to his religion. Consequently, it is not the action in this novel that makes it so powerful, but rather the imagery that Misha’s words create that really tells the reader the story of the Nazi occupation of Warsaw and life in the ghetto.

It is an excellent novel for students studying the Holocaust. Most of the story is divided by seasons, starting in the summer of 1939 through to the summer of 1942, in other words the length of the existence of the Warsaw Ghetto, making it ideal for creating a timeline of events.

Milkweed also explores several important universal themes, particularly about identity and friendship, two ideas that young readers are beginning to think about in their own lives. And while it is also a very disturbing novel, some of the descriptions are quite graphic, yet it is also a compelling work and I would highly recommend it.
This book is recommended for readers age 11 and up.
This book was purchased for my personal library. 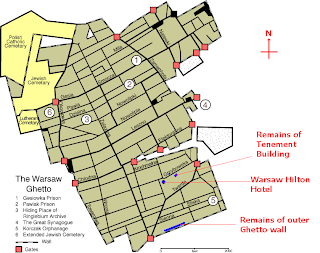 Streets are often mentioned in the novel and I found this map from the Florida Holocaust Museum's Teacher's Guide to the Holocaust was an excellent way of following Misha’s travels:

If you are wondering about the wall of that surrounded the Warsaw Ghetto that Misha and Janina were able to slip in and out of, Wikipedia has this photo from the back yard of Sienna Street 55: 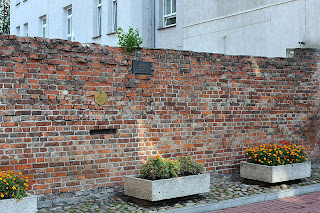