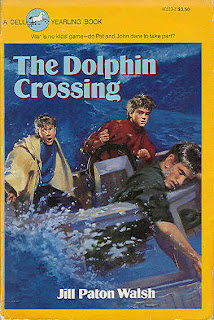 I know I should never judge a book by its cover, but I put off reading The Dolphin Crossing for a long time simply because I didn’t like the cover of the copy I had. Silly reason I know, especially since it turned out to be such a good book.

The Dolphin Crossing begins in the spring of 1940 and tells the story of two teenage boys from very different backgrounds and circumstances brought together because of the World War II. John Aston, 17, lives with his mother in a cottage on their seaside estate after the army requisitions their main house for the war effort. Pat Riley, 14, is a London evacuee living in an abandoned railroad coach in the middle of a cow pasture with his pregnant step-mom. Their paths cross when John stops a group of rowdy boys from picking on Pat after school and then walks him home. He stays and has tea, but he is clearly disturbed by the horrid living situation of the Rileys.

Later that day, John’s mother suggests they take a walk and John takes her over to meet the Rileys. Pat and John’s mothers hit it off immediately, as John suspected they would, especially since John has an ulterior motive for taking his mom there. Back home, he asks if they could make their empty stable habitable for the Rileys to live in. It takes a lot of work, but Pat knows something about carpentry and how to mix cement for a new floor. Cement could still be bought but sand for it couldn’t, so the boys decide to head to the beach at night and get the sand there. After returning home, Pat discovers he has lost the watch his dad had given him at the beach. That night, the boys go back to the beach to look for it and discover that Crossman, the man in charge of the nearby shipyard, is dealing in black market petrol.

Eventually, Pat and John finish converting the stable into a very pleasant place to live, with electricity, private sleeping quarters, bathroom and kitchen facilities and even a living room. Even Mrs. Aston helps out with curtains, furniture and baby things she had saved from her own sons. Mrs. Riley is surprised and happy with her new home, but goes into labor shortly after she and Pat move in.

Now, though, with their project finished, John has time on his hands and one day, while out, he notices a lot of small boats heading out to sea and can hear the sounds of bombs and guns across the channel in France. Figuring out what the boats are doing, John and Pat decide to join the flotilla, taking the Aston boat, the Dolphin, over to Dunkirk to try to save as many soldiers as possible. John blackmails Crossman into getting the boat ready for the trip by threatening to expose his black market scam. John is a very good sailor, but Pat had never even seen the sea until he was evacuated, let alone sail on it. Nevertheless, they make it to Dunkirk, where they make numerous trips ferrying soldiers from the beach to the waiting ship, the HMS Wakeful. Exhausted, they finally are forced to leave Dunkirk with a boatload of sailors and head back to England, but not before John sees the Wakeful torpedoed by a German U-boat. Feeling completely disheartened, John believes that all their work was for nothing:


A great gust of rage swept over John. All that work; the long day yesterday, the danger they had borne, the risks they has run, all for nothing. All so that those hundreds of soldiers could drown instead of being shot. (pg 116)

When they get back home, John takes the sailors to his mother’s house, believing she would be able to take care of them, which, naturally, she did. John is also surprised to find his father home too. This is, of course, not the end. Pat has disappeared along with the Dolphin. Now the question is why and to where?

The Dolphin Crossing is a short book that covers a lot of ground. The most striking aspect of the book is the way it brings out class differences. It begins by showing how the people could and probably did get lost in the shuffle during the evacuation. Many people did not accept working class evacuees from London into their homes with open arms. Consequently, it is easy to believe that a poor, pregnant woman could end up in a railroad coach with no running water nearby, as opposed to the Astons who were able to just move into their nice habitable cottage. John’s father is a captain in the merchant navy; Pat’s father is a soldier in the infantry on the continent. John is being taught by a private tutor, but was at boarding school before the war. Pat must stay in school past the school leaving age in order to get some skilled labor training. Yet, while the reader is very aware of the class difference, it is not really a problem for the two main characters themselves. Both are lonely, restless boys who want to do something for the war, like their dads, but are just too young. John also has an older brother whom he looks up to, but he is a conscientious objector. Not much is made of this, except that Pat finds it disgraceful and lets John know how he feels in no uncertain terms. By polarizing the two characters, Walsh has drawn a picture of how the war has a unifying effect on them through their desire to do something to help the war effort.

The novel’s ending is left open, forcing the reader to think about what happened and decide for themselves whether Pat’s disappearance was an act of heroism or simply schoolboy foolishness. And now you may want to read it to find out what I am talking about. For that reason, and because this was a well done historical novel, I highly recommend this book.

This book is recommended for readers’ age 10-14
This book was purchased for my personal library.

﻿﻿﻿﻿﻿﻿
(Unknown to John, the did make one successful trip back to , before it was hit, sustaining heavy losses.)