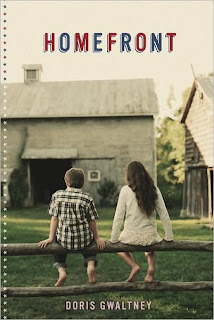 Homefront begins in the summer of 1940 and the war in Europe hasn’t yet really effected the Motley family very much on their farm in rural Virginia. Older brother Johnny works on the farm with his dad, eldest daughter Elizabeth is preparing to go off to college, new 7th grader Margaret Ann will finally have a room of her own, instead of sharing one with her grandmother, and twins Paige and Polly are looking forward to finally starting school.

Margaret Ann no sooner gets settled in her new room, when it is taken away from her. Her cousin Courtney and her Aunt Mary Lee will be coming to live with the Motley family to get away from the Blitz in London, where they live. Margaret Ann is, quite naturally, resentful at losing her room to a cousin she has never met and the situation only gets worse when Courtney arrives.

Margaret Ann takes an immediate dislike to Courtney, but she’s the only one. Courtney is sweet, charming, and helpless. Everyone feels sorry for her and treats her in a very special way because of the war and because her father is off flying in the RAF. Even Bobby Holland, Margaret Ann’s best friend, seems to be falling under Courtney’s spell. And she is able to make friends with all the popular girls at school who have always ignored Margaret Ann because she isn’t a town girl.

It seems like things can’t get much worse for Margaret, but then on December 7, 1941, Pearl Harbor is attacked and the United States enters the war. Elizabeth announces that she is going to marry her boyfriend Tommy Gray at Christmas just before he leaves for the army. Then, Johnny runs off to join the navy, bequeathing his room to Margaret Ann, who is racked with guilt over this. If she hadn’t complained so much about losing Elizabeth’s room, maybe he would have stayed home.

By summer, Elizabeth is pregnant and Margaret Ann’s grandmother is beginning to have very noticeable memory lapses. In late August 1941, after news arrives from England that Courtney’s father is missing in action, things really being to change. Both Courtney and Aunt Mary Lee seem to lose their zest for living. They lose their appetite and Courtney’s grades go down in school. And then Courtney does the unexpected – she asks Margaret Ann if she can speak with her about a problem. It seems Aunt Mary Lee has been crying in bed at night ever since the news came about her husband and Courtney can’t get any sleep. This, she tells Margaret Ann, is why she is failing in school. And Margaret Ann really does the unthinkable – she invites Courtney to share her room from now on. This is truly a turning point in their relationship, but hardly the end of the story.

Homefront is a well-written, believable story. The beauty of it lies not in the story of Margaret Ann and Courtney, but really in the description of everyday life in this small American community and how the war impacts the people living there. Margaret Ann is the narrator and her descriptions and observations are sharp, despite the fact that, in the beginning of the story, she can lapse into a somewhat whiny, self-absorbed voice when talking about herself. In fact, I almost put this book down because of Margaret Ann’s self-pitying attitude, but I stuck with it and I am so glad I did.

Gewaltney takes the reader on a journey starting just before the United States entered World War II all the way to the end of the war in Homefront.  In this way, she has given the reader a wide window through which to observe the immediate and gradual changes in life due to the war and how people adjusted to them. But it is not always a picture of unflinching sacrifice for the war, sometimes people were asked to make sacrifices that were really not welcomed or that they just simple resented. After all, a true picture of anything would include the positive as well as the negative elements. Homefront is, then, a sad, funny, tragic and moving portrayal of an American family in wartime.

There are not as many books written about the American home front as there are about the English and European home fronts, making this is a realistic and welcomed addition to that particular theme in World War II fiction for young readers.

This book is recommended for readers age 10-14.
This book was purchased for my personal library.
Posted by Alex Baugh at 8:45 AM