This has been a very bookish week, and ironically, I haven't managed to get much reading done.


On Sunday, I had some work to do in the New York Public Library on 42nd Street and it happened to be one of the days they were celebrating the library's 100th anniversary.  Outside the library, there was a Lego sculpture of the famous library lions, Patience and Fortitude.  Who knew you could do that with Legos?  For that matter, who knew there were that many grey Legos to do this with, but here is the picture of both a Lego library lion and a real deal library lion: 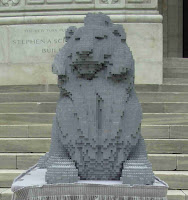 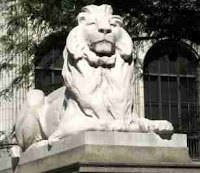 On Tuesday, the BEA (BookExpoAmerica) opened its doors for us to peruse and sometimes receive the latest from publishers and authors.  Every author I spoke with was so open and friendly, it really made it a nice expereince.  I want to just sit and read all these new books right now, but I know I will get to each one soon and yet, where to start? 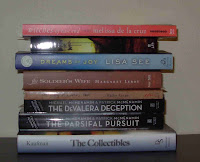 Lisa See, who wrote Shanghai Girls, was there reading from the sequel Dreams of Joy, which I am looking forward reading myself.  Father and son, Michael and Patrick McMenamin, are writing a thriller series together involving Winston Churchill that looks very enticing.  They gave me the first and second books, The DeValera Deception and The Parsifel Pursuit, which naturally involves a holy relic. 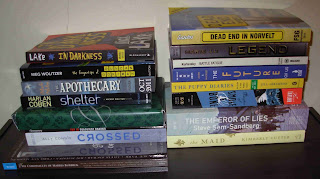 I also can't wait to read the YA novel The Apothecary by Maile Meloy, who was so charming.  The novel The Emperor of Lies by Steve Sem-Sandberg, which is about the Lodz ghetto, look like a fascinating book, as do In the Garden of Beasts by Erik Larson, about an American family in Hitler's Germany, and Yellow Star by Jennifer Roy.

It also was so nice to meet so many bloggers whose blogs I have been reading for a while now, and meeting some new bloggers, whose blogs I will be visiting in a few days.
Tomorrow is the Book Bloggers Convention and there are a few sessions on blogging I am anxious to attend.﻿﻿
Posted by Alex Baugh at 8:04 PM

Email ThisBlogThis!Share to TwitterShare to FacebookShare to Pinterest
Labels: BEA