Hedy's Journey: The True Story of a Hungarian Girl Fleeing the Holocaust by Michelle Bisson, illustrated by El primo Ramón 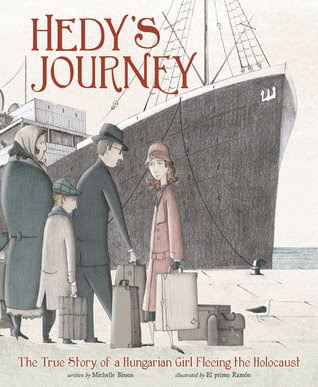 In Hedy’s Journey, Michelle Bisson tells the true life story of her mother’s flight from the Nazis and her home in Hungary in 1941.

Although Hungary was allied with the Axis powers, Germany and Italy, during the 1930s and early 1940s, Hungarian Jews were not rounded up and deported to concentrations camps until 1944, when Nazi Germany finally deposed the Prime Minister and occupied the country.

But that didn’t mean Hungary was a safe haven for Europe’s Jews. Far from it, as Hedy Engle learned when her cousin Marika, a Polish Jew who was visiting with Hedy’s family in Budapest, was ordered to report to the deportation office there in 1941. Sent to a concentration camp, Marika and her family were never heard from again. Hedy’s family knew that if the Nazi’s were going to round up Polish Jews in Hungary, it wouldn’t be long before they came for Hungarian Jews.

As if to emphasize their precarious position, in the summer of 1941, Hedy’s father, a successful jeweler, was sent to a labor camp. Luckily, he was released in three months. And that was when the family decided it was definitely time to leave Hungary.  But even with visas to enter the United States in hand, only three train tickets could be found to take them to Lisbon, Portugal, and a ship across the Atlantic Ocean. It was decided that Hedy’s parents and younger brother Robert would be the first to leave Hungary, and Hedy would follow a week and a half later. Then, when they would reunited in Lisbon, they all would board a ship to America and freedom.

Imagine being a 16 year-old Jewish girl traveling alone through Nazi-occupied Austria. Hedy’s trip to Portugal was fraught with fear and caution. Although she didn’t look Jewish and most people treated her as though she weren’t, the sight of German soldiers in Vienna was still a frightening experience for the teenaged Hedy. When she finally arrived in Lisbon, her family breathed a sigh of relief. But then, Pearl Harbor was bombed, and the US entered World War II.

As if they hadn’t already dealt with enough challenges and setbacks, the Engle family now found themselves stranded in Portugal with worthless tickets for a ship that was not longer available. Eventually, the family does secure passage on a ship that comes with its own setbacks and challenges, but ultimately, the family arrived in New York harbor and freedom.

Hedy’s Journey is a true story about courage and daring in the face of fear. It is based on the memories that Hedy shared with her daughter, author Michelle Bisson. There are photographs of the family at the end of the book, along with information about what happen to the family after arriving in the U.S. Readers will also find a map of the journey the Engle family undertook, as well as a timeline of events.

Hedy’s Journey is an ideal book for introducing young readers to the Holocaust. It is done as an illustrated book. It is really in part graphic form, and in part a picture book for older readers. The story is told in narrative, though, rather than text bubbles. The illustrations are done in subtle sepia tones, giving it an old fashioned quality, with shades of gray, but Hedy’s clothes are highlighted in dusty pink.

The journey of Hedy and her family may not sound like a terribly dangerous or distressing flight from the Nazis if compared to other similar accounts, but it is wise to remember that for Jews every moment that they lived under this regime was dangerous. Fleeing held it own dangers, but for many like Hedy and her family, they thought it was worth the risk.

This book is recommended for readers age 9+
This book was an EARC received from NetGalley
Posted by Alex at 9:18 AM