John Bloom and the Victory Garden by Leigh Shearin 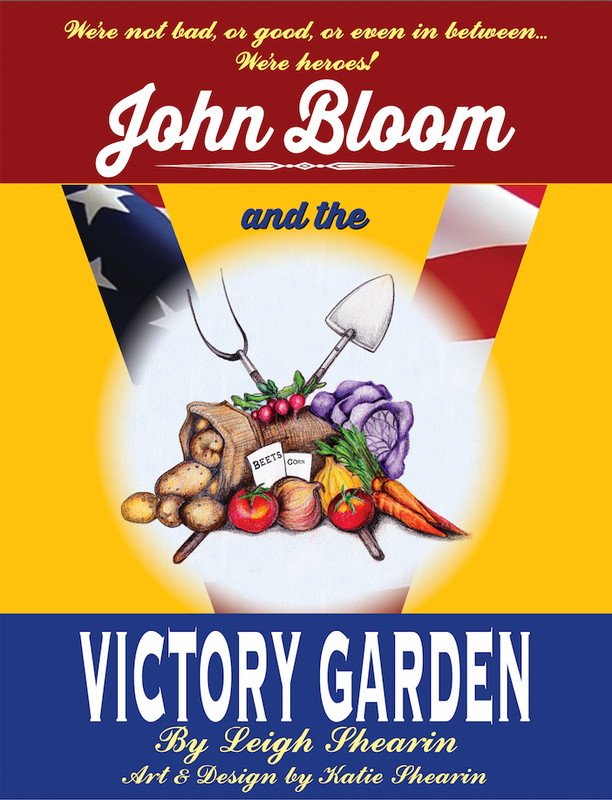 When John Bloom, 10, woke up on Monday, December 8, 1941, he woke up to the news that the Japanese had bombed Pearl Harbor the day before.  America was now at war and John feels he needs to do something to support his country.

John thinks that forming a club with his friends Chewie and Joe so that they can do good-works projects is a good idea. His frineds agree and they name it The American Boys Club, or the ABC, for short.  They decide their first project should be chopping firewood for a neighbor, 98 year old Mr. Hutchins who has been ill and unable to do it himself.  But when Mr. Hutchins greets them at his front door with a pitchfork, they decide to prank him instead, by filling up his outhouse with snow.

John knows it is wrong to do but goes along with Chewie and Joe to save face.  The next day, looking for something to do after their club meeting, the boys decide to go back to Mr. Hutchins's place to see if the outhouse was still full of snow.  But when they get there, there is no sign of Mr. Hutchins anywhere, until John notices a hand on the floor.  Breaking into the house, he discovers Mr. Hutchins unconscious on the floor.  Chewie runs for the doctor while John and Joe stay at the house.

It turns out that Mr. Hutchins had fallen and is now required to stay in bed until he recovers, first in the hospital and then at home.  But when John goes over to see how the old man is doing, he discovers that there is no food in the house and Mr. Hutchins hasn't eaten for a while.   Perhaps John has not only found the perfect good-works project for The American Boys Club, but has also made a new friend who can help him do something else good for the war effort as well.

John Bloom and the Victory Garden is a real home front novel.  Not only does it address the fears that most Americans felt at the outbreak of World War II, but it shows how quickly people responded to being at war.  For example, John's father immediately goes to the Army recruiting office to try to join up; John deals with concerns that his friend Joe, who is Italian, will be sent to an internment camp with his parents and grandmother; America's first demoralizing defeats are acutely felt by the residents of John's town, Appleside, NJ.

There are other nice touches like how people really depended on their radios for entertainment and news; and that boys still wanted shiny new bikes for Christmas despite the war; and of course, there is talk about rationing, and expectations of food, rubber and metal shortages.

The characters are well realized, even the secondary characters have a feeling of depth to them.  The community that John lives in is easy to picture and there is a helpful map at the front of the book to situate the reader in Appleside and the boys adventures all over the town.

There is a lot of talk about food in the novel, dishes made by John's mother and Joe's grandmother, so to satisfy the cravings that will no doubt result from the food descriptions, there are some recipes at the back of the book, including Nonna's Buttered Noodles, which I am going to make this week.

This is a book that any middle grade reader will enjoy, whether or not they are history buffs, mainly because the themes of friendship, loyalty and helpfulness are timeless.