A Bag of Marbles by Joseph Joffo, adapted by Kris, illustrated by Vincent Bailly and translated by Edward Gauvin 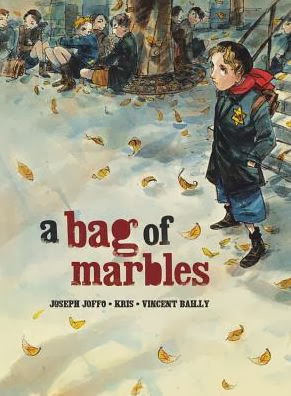 After fleeing Russia because of the pogroms there,  Joseph Joffo grandfather and his family settled in Paris and quickly assimilated.  The family grew and prospered.  Jo's father became a successful barber, married and had 4 sons.  But, in 1941, it looks like things are going to get bad in Paris now that the Nazis have taken over the city.

Jo, 10, and his older brother Maurice are forced to wear yellow stars to school, as is every Jew in Paris.  Jo resents it and when a friend offers to trade a bag of marbles for the star, Jo jumps at the chance.  But even without the star, the fact that he and Maurice are Jewish causes a fight in the schoolyard.  Arriving home, bloodied and bruised, their father makes the decision to send the boys to Vichy France, the southern free zone to stay with their older brothers.

Armed with 5,000 francs and the addresses of safe places to find help, the boys are sent on a dangerous journey through occupied France by themselves.  Using only their wits, and sometimes making poor judgements, they travel by train, bus and foot, all the while having to evade the Nazis and occasionally finding a kind person willing to help them.

Yes, they make it to Menton, but the story doesn't end there.  Remember, they left their parents in Paris, who promised they would shortly follow them to Menton.  But, word comes one day that they were picked up by the Nazis and re in an internment camp.  And the boys are themselves picked by the Nazis when they unknowingly enter a resistance center during a raid.  Arrested, they are questioned by the Gestapo and must convince them that they are not Jews despite being circumcised.

Will they succeed and will they be reunited with their parents and be a family once again?

I really wanted to love this graphic story, particularly since there are not that many good ones for kids about WW2, fiction or nonfiction (exceptions are Carla Jablonski's Resistance trilogy, Miné Okubo's early work Citizen 13660, and Lily Renée, Escape Artist by Trina Robbins, to name a few reviewed here).  But I just didn't love it, I only liked it.

And what made me like it was really the artwork.  Graphics don't have a lot of time and space to tell a story, so the reader must rely on the illustrations to help carry it along.  And Vincent Bailly's colorful, detailed watercolor illustrations really do just that, and along the way they impart exactly what the characters are feeling at any given point - happiness, sadness, fear, anger, pleasure.  A quick, simple facial expression says so much here.  Bailly's illustrations are brilliant.

But alas, at times the story was just dull.  It lacked some of the poignancy you might expect from a story about two young boys sent out into a very dangerous world on a long journey towards safety.  Though I could read what the boys felt by the look on their faces, I never felt those same feelings.  In fact, I never felt any emotional pull in the story and never really connected with Jo and his brother.  I can't help but wonder what the original memoir written by Joseph Joffo back in 1974 was like.  That was a book written for an adult audience, and this version of A Bag of Marbles was rewritten for a younger reader.  Perhaps sometimes was lost in the shuffle.

I kept waiting for the titular bag of marbles to make another appearance in the story but the only part it played was the schoolyard trade and I am still scratching my head over why an obviously not Jewish boy would want the star that Jo was wearing.

On the plus side, there is a very nice map showing the route Jo and Maurice took to safety and their modes of transportation.  There is also a glossary of French words used.  Interestingly, when German is used, the translation is at the bottom of the page.  And there is a nice Afterward that explains what France was like under German occupation.

A Bag of Marbles is a nice book for readers who are really interested in the various experiences of Jews during WW2.  It would be a nice supplemental text for teaching the Holocaust, as well.  It will really appeal to all the kids sitting on the floor in Barnes & Noble across the country after school reading graphic books with their friends (and I don't say to be snarky - those knowledgeable kids have helped me find something I wanted on more than one occasion).

Sequential Highway has a very interesting interview with the illustrator Vincent Bailly about working on comics in general and on A Bag of Marbles in particular.
Posted by Alex at 8:12 AM

Email ThisBlogThis!Share to TwitterShare to FacebookShare to Pinterest
Labels: Family, France, Holocaust, YA