Picking my Top Ten in any category is usually hard for me.  Either I can't come up with ten things or I end up with way too many.  But this weeks Top Ten list took me no time at all to figure out.  And it was NOT what I was expecting.  Some are old, some are new, all are favorites.

They are listed in no particular order of favoritism.

1-  Etched in Clay: The Life of Dave, Enslaved Potter and Poet by Andrea Cheng
Cheng has imagined the life of this quiet rebel who lived in the 19th centur in a unique and
informative way in this free verse YA novel.

2-  Maggot Moon by Sally Gardner, illustrated by Julian Crouch
This year's Carnegie medal winner, it is a YA story set in an oppressive dystopian 1950s England about a severely dyslexic boy who finds the courage to rebel.

3-  Hokey Pokey by Jerry Spinelli
I loved this MG book set in a metaphoric world of children's play and watching the main character as he comes of age in the course of one symbolic day.

4-  The Terrible Thing that Happened to Barnaby Brocket by John Boyne
In this MG novel, Barnaby's boringly normal parents, clearly Australian relatives of the Dursley's,can't stand that Barnaby refuses to be normal and continues to float.  When his mother does the unspeakable and lets him go, Barnaby floats into all kinds of experiences with different people who accept who they are and teach Barnably to embrace who he is.

5-  Navigating Early by Clare Vanderpool
An MG quest story about an unlikely friendship between two boys and the journey they take to find out who they are as they follow the twists and turns of the Appalachian Trail and Early, who is anumber savant, narrates a parallel quest story about Pi (yes, 3.14 Pi) that takes them all full circle.

6-  Beholding Bee by Kimberly Newton Fusco (To Be Reviewed)
I just finished this wonderful MG story about 12 year old Bee, born with a diamond shaped birthmark on one side of her face, who just wants a home and family and the two aunts who help her, even though she and her little dog Peabody are the only ones who can see them.

7-  Tamar, a Novel of Espionage, Passion and Betrayal by Mal Peet
A YA novel set in 1945 and 1995, this is a delicious story that is about identity - finding out who you are or even inventing who you are. Oh yes, it is also about spies, codes, love, betrayal and intrigue and one of the best of its kind.

8-  After by Morris Gleitzman
This is the 4th novel about young Felix and his flight from the Nazis and takes the reader back to 1945 and Felix's life as a 13 year old partisan, finally able to fight the Nazis rather than just running from them.  If you have already read Once, Then and Now, After will give you the sense of closure that you might need if you have been following Felix from the beginning.

9-  The Lions of Little Rock by Kristin Levine
In this MG novel, Marlee Nesbit, so shy she can't speak to anyone outside her family, finally does find her own voice in 1957 Little Rock, Arkansas in a fight against discrimination and segregation.

10- Unspoken: A Story from the Underground Railroad by Henry Cole
This wordless picture book tells the poignant story of a young girl's compassion towards a run away slave by silently giving him food and helping him avoid capture one night.

I really needed a Top Eleven this week because my other favorite was: 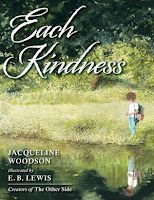 Each Kindness by Jacqueline Woodson

A young girl repeatedly rebuffs the proffered friendship of a poor girl in her class, but when the girl doesn't come back one day, she recalls her own unkindness and how she could have done things differently.  A nice look at bullying from the perspective of the bullier.

These are my favorites so far this year, what are yours?
Posted by Alex at 8:58 AM