It's Monday! What are you reading? 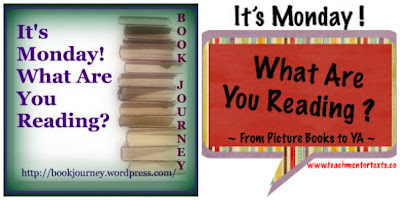 It's Monday! What are you reading? is the original weekly meme hosted by Sheila at Book Journey.  It's Monday! What are you reading? - from Picture Books to YA is a kidlit focused meme just like the original and is hosted weekly by Teach Mentor Texts.  The purpose is the same: to recap what you have read and/or reviewed and to plan out your reading and reviews for the upcoming week.

Last week, I probably read less than I have in a long, long time.  I was down in Washington DC, visiting family and doing other things and just had no time to really be able to get into a book, which is not a good thing when you have two different blogs.  But I did read and World War II: a visual history of the world's darkest days by Sean Callery and Odette's Secrets by Maryann MacDonald, none the less: 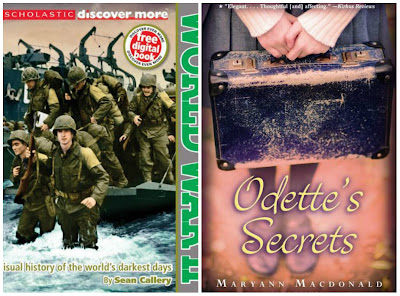 This week, I plan to read the following (all descriptions from the publisher's blurbs):

Kid Soldier by Jennifer Maruno
Fatherless and penniless, fifteen-year-old Richard Fuller wants a bike, so Mr. Black, the baker hires him to help with deliveries. Mr. Black entertains him with army stories and teaches him Morse code. He invites Richard to attend the opening ceremonies of the local 1939 military camp. Infatuated with army life, Richard takes part in Army training camp under an assumed name. When war looms, he makes the most impulsive decision in his life and enlists.
He travels to England, witnesses the terror of the Battle of Britain, the horrible death of a German pilot, is caught in the London Blitzkrieg, and is wounded himself. When his true age is discovered, Richard faces a possible court-martial.
Will Richard’s desire for adventure lead to disaster so early in his life?

After by Morris Gleitzman
In the fourth part of Felix's story, continuing his adventures in World War Two, he faces perhaps his greatest challenge - to find hope when he's lost almost everything, including his parents. As Europe goes through the final agonizing stages of the war, Felix struggles to reconcile hatred and healing. He's helped by a new friend, but if he should lose her as well ...

(my review of Once, Then and Now, the first three books about Felix and his survival while on the run from the Nazis.)

Sorrowline by Niel Bushnell
The past is not a frozen place. Graveyards are not dead ends. And if the Sorrowline lets you in there is a hidden world of adventure waiting behind every gravestone.
Just when 12-year-old Jack Morrow’s life is falling apart he discovers his natural ability to travel through Sorrowlines: channels that connect every gravestone with the date of the person’s death. Confused and alone Jack finds himself in 1940. He embarks on an adventure through London during the Blitz with Davy, his teenage grandfather, to find a mystical Rose that might just save his mother’s life, a mother who he has already seen die. But the terrible power of the Rose of Annwn, is sought by many, and the forces of a secret world are determined to find it first. With a league of Undead Knights of his trail, commanded by the immortal Rouland, can Jack decipher the dark secret hidden at the heart of his family? Can he change his own destiny and save his mother?

His Majesty's Hope (Maggie Hope Mystery #3) by Susan Elia MacNeal
...whip-smart heroine Maggie Hope returns to embark on a clandestine mission behind enemy lines where no one can be trusted, and even the smallest indiscretion can be deadly.World War II has finally come home to Britain, but it takes more than nightly air raids to rattle intrepid spy and expert code breaker Maggie Hope. After serving as a secret agent to protect Princess Elizabeth at Windsor Castle, Maggie is now an elite member of the Special Operations Executive—a black ops organization designed to aid the British effort abroad—and her first assignment sends her straight into Nazi-controlled Berlin, the very heart of the German war machine. Relying on her quick wit and keen instincts, Maggie infiltrates the highest level of Berlin society, gathering information to pass on to London headquarters. But the secrets she unveils will expose a darker, more dangerous side of the war—and of her own past.

What are you reading this week?

Email ThisBlogThis!Share to TwitterShare to FacebookShare to Pinterest
Labels: It's Monday. What are you reading?