Yertle the Turtle by Dr. Seuss

And the turtles, of course...all the turtles are free
As turtles and, maybe, all creatures should be.

Today is the birthday of Theodor Seuss Geisel A/K/A Dr. Seuss.  Dr. Seuss was born in Springfield, MA on March 2, 1904.  He attended Dartmouth College in New Hampshire, where he first began using the pen name Seuss while working on the college's humor magazine Jack-O_Lantern.  Not long after graduation, Seuss became Dr. Seuss.

Meanwhile, Dr. Seuss published his first children's book And to think that I saw it on Mulberry Street in 1937.  This was followed by The 500 Hat of Bartholomew Cubbins in 1938, The King's Stilts and adult book The Seven Lady Godivas in 1939 and Horton Hatches the Egg in 1940.

After Dartmouth, Dr. Seuss went to Oxford graduate school, got bored and traveled around Europe instead.  Returning to the US, he worked in advertising and did some cartooning but once World War II started, Dr. Seuss began working for a left wing weekly magazine called PM.  Seuss was a strong opponent of American isolationism, and used his PM cartoons to express his feelings:


After the US entered the war, he continued to use his biting humor in his political cartoons, like the one below that introduced his idea of the vulnerability of stacking turtles to call out the defense producers that were delivering defense material 'at a turtles pace' thereby slowing down defense production and the threatening an Allied victory with instability and failure: 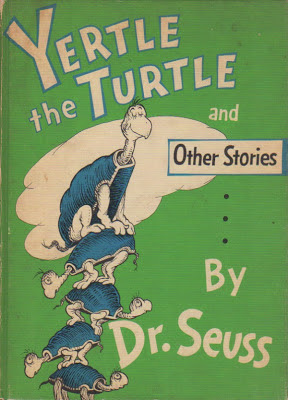 All of which brings me to Yertle the Turtle.  With a history of no-holds-barred political cartooning, it wasn't surprising to find out that Dr.Seuss, that master of political satire, was at it again just few years after the war ended.

Yertle is the story of the king of the pond who one day looks around and despite the contentment of his turtle subjects, decides he needs to increase the area he rules over.  So he demands that build his a higher throne:

The turtles pile themselves up, one on top of the other, creating a higher throne, so Yertle could "see 'most a mile!"

But then the bottom turtle, named Mack, complains about the standing so long with turtles on his back.  Angered, Yertle demands a higher throne and once again,  turtles,"Whole families of turtles, with uncles and cousins" come to add themselves to the stack of turtles already there.
And once again Mack speaks up:


"I know, up on top you are seeing great sights,
But down at the bottom, we, too, should have rights.
We turtles can't stand it. Our shells will all crack!
Besides, we need food.  We are starving! groaned Mack."

But Mack speaks to no avail.  That night, when the moon rises, Yertle, seeing that it is higher than he is, starts to demands more and more turtles when suddenly Mack, having had enough of Yertle, burps and the whole stack of turtle shakes, throwing Yertle into the mud below - where he remained, ruling all he could see through the mud.

Now, I am sure you can see the resemblance to Hitler and his quest for more and more Lebensraum in Yertle.  And it isn't hard to figure out that the turtles are the German people under Hitler's dictatorship.  But there is a moral of this story and it is simply that anyone can make a difference and their action can bring about change.

If you wish to explore the social and political meanings behind Yertle the Turtle in greater depth, you can find a excellent lesson plan at the Teach Peace Foundation.

Two interesting notes:
1- Yertle the Turtle was first published in 1958 by Random House (which is actually the copy I own, a hand-me-down from an older cousin I wouldn't to give up to a younger cousin).  At the time, a word like burp was considered to be in poor taste and there was some concern at publishing it, never mind the political message in it.  But kids being kids, the book was an instant successful and no one was the worse for the use of burp.  And speaking of the political message...

2- In 2012, a teacher at a school in British Columbia was asked to remove a quote from Yertle the Turtle that she had displayed in her classroom because there was a line in it that was considered too political.  It seems that there was a vote in 2011 to keep political materials out of classrooms in British Columbia, because children must be shielded from them.  The quote in question:


"I know up on top you are seeing great sights,
But down at the bottom we, too, should have rights."

You can read the whole story here.