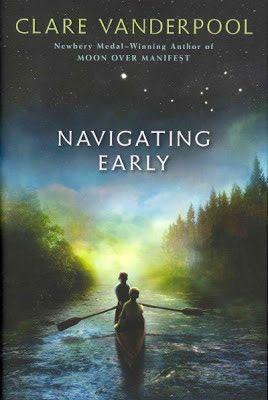 Sometimes, when you read a debut novel that also wins a Newbery, your expectations for next novel by the same author are way too high.  That was exactly what I was thinking when I picked up Navigating Early at the library and I must say I was very pleasantly surprised when I began reading and realized that I was not to be disappointed.

The book begins just after World War II has ended in Europe and 13 year old Jackie Baker's father, a Navy captain, has returned home to Kansas, not because of the end of fighting, but to bury his wife.  Not knowing what to do with their son Jackie, he enrolls him in the Morton Hill Academy for Boys, a boarding school in Maine.

Not happy about this and somewhat of a misfit in the school, Jackie discovers a boy living in the janitor's workshop instead of the dormitory.  Early Auden, that strangest of boys, as Jackie describes him, is also a misfit, a boy who uses rituals to organize and navigate the world.  He also has an extraordinary ability for mathematics.  Numbers, Early tells Jackie, tell a story, specifically a story about Pi, that most mysterious of numbers: "The numbers have colors - blues of the ocean and sky, green grass, a bright-yellow sun.  The numbers have texture and landscape - mountains and waves and sand and storms.  And words - about Pi and about his journey.  The numbers tell a story." (pg 66)

Early and Jackie becomes friends.  And it turns out that Early, like Jackie, has suffered a loss of someone important to him.  Fisher Auden, a hero and a rowing legend at Morton Hill, was Early's older brother who went to war right after graduation.  But after a dangerous mission, Fisher is declared Missing in Action, presumed Dead.  Early, however, is convinced that Fisher is hiding in the Maine woods and has decided to find him during a school break.

Jackie, disappointed that his father couldn't come to get him for the break, decides to join Early on his quest along the Appalachian Trail to find Fisher.

And what a quest it is.  It is a story about how Jack, Early and Pi lost heir direction in life and how they tried to navigate their way back to it.  And along the way, they meet all kinds of strange people, like the  pirates searching for treasure, a Norwegian still pining for his first love, a 100 year old woman stilling waiting for her son to come home.  As the boys travel along the Appalachian Trail, Early narrates his story about Pi's journey in an attempt to earn the name Polaris which his mother had given him.

And as the boys travel along, there are lots of coincidences, lots of twists and turns in Navigating Early, but never a dull moment.  In the most enchanting language, Vanderpool weaves a taut, complex, entertaining story.  I found myself anxious to get back to Jack and Early whenever I put the book down and, like Jack, I wanted to hear more and more of Pi's story.

Whenever a book is set in or after WWII, I ask myself why that time period.  The war impacted everyone in some way or other.  It brought Jackie's father home before it was over.  But more importantly, it showed how lost some people were when it was over.  Jackie's father knew the Navy, how the operate, organize, control his ship.  But in Kansas, after his wife's death, he was faced with an inability to navigate his world there.  And this led to his inability to guide Jack, who without mother and father, also has difficulty navigating the world.  Fisher was also a lost soul because of the war, and Early completely lost his way of navigating the world when Fisher went missing.  And so while Navigating Early is about navigating, it is also about finding your direction again, just as Pi must.  Some many had to grapple with that after the war.

A lot of people have used the words autistic or Asperger's to describe Early.  Yet, it is not for us to diagnose him and to her credit, Vanderpool does not label Early either, but merely has Jackie call him "that strangest of boys" which would be more apropos for the time.

This is a wonderful novel, and I think it is not to be missed.