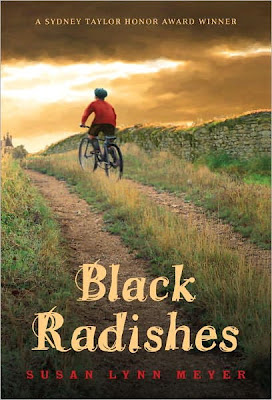 Black Radishes is another book that is based on the experiences of someone in the author's family during World War II.  This kind of reality-based historical fiction often makes for an exciting, suspenseful story and Black Radishes is no exception.  According to the author's note, Susan Lynn Meyer's father, grandmother and aunt were able to escape from France after its occupation by the Nazis, so she had lots of first hand material to create this stirring novel.

Black Radishes story begins in Paris in March 1940.  As the German army gets closer to France, Gustave Becker, 11, and his parents, French Jews, firmly believe that the Maginot Line, the pride of France's border defense, will be able to hold them as bay.  But even in Paris things are changing and now Gustave is beginning to experience some anti-Semitic feelings among the people there.

But when his parents tell him that they are going to leave Paris while they wait for American visas, moving to a village called Saint-Georges in the Loire Valley, Gustave doesn't want to leave despite the anti-Jewish graffiti and the Nazi's rapid advance in Europe.  And he especially doesn't want to leave his friend Marcel Landeau and his cousin Jean-Paul.

Life in Saint-Georges is dull for Gustave, compared to Paris, with one exception.  On their first Shabbat in Saint-Georges, Gustav is pushed into a fountain by a boy his age when he goes to buy the bread for that important meal, ruining the bread, his pride and any sense of safety Gustav may have felt there.
Meanwhile, the Nazis are rapaciously invading the country and country that spring of 1940 until they finally begin their invasion of France in June.  Gustave's parents decide to leave Saint-Georges and head for the Spanish border.

But even in his father's truck, traveling is slow and difficult, the roads are clogged with so many people heading to the border.  After traveling a few days and not making much progress, the crowd was attacked by Nazi planes machine gunning them.  Gustave's parents decide to return to Saint-Georges.  As luck would have it, when France was divided in occupied and unoccupied territory in the Armistice signed between France and Germany, Saint-Georges was right on the border of the unoccupied area, meaning that Gustave and his family could live in relative safety at least for the present.

In September life settles down, somewhat.  Gustave starts school and discovers that his Shabbat tormentor is in his class.  But he also meets and makes friends with Nicole.  At home, there is nothing much eat because the Nazis take what they want from shops, homes and gardens, leaving little for anyone else.  Gustave's father decides they will cross the border in his truck into occupied France and barter for some food, using the supplies he brought with him from Paris and his own Swiss ID papers.  This works out well for them and they continue to cross the border for the next year and whenever they can, they make sure there a black radishes in view.  They use they as a way to distract the German border guards, who like to eat them with their beer.

In the Fall of 1941, Gustave's mother finally hears from her sister in Paris, who tells them in coded language that things are getting bad for Jews there, that Gustave's friend Marcel and his mother are missing and they want to get away.   Meanwhile, Nicole invites Gustave along for a bike ride to see the famous Chateau de Chenonceau, where her father works.  It is a strange day out for Gustave, but it is the beginning of the part he will play in the French Resistance, along with his father.
How will they ever get Jean-Paul and his family out of Nazi-occupied France and to safety?

Meyer's realistic novel is an interesting coming of age story set in a time when coming of age happened quickly and young.  The reader sees Gustave transformed from a boy who needs to carry his toy Monkey around in his pocket to see safe to a boy who takes dangerous action to do what is right.  I liked that Black Radishes is set in the unoccupied part of France.  So often, stories a set in the occupied part where there was so much more danger, but it is good to see that life wasn't easy in unoccupied France.  Yet, Meyers depicts a very measured amount of violence and anti-Semitism as well as the fear, tension, cold and hunger that people suffered every single day in both parts of France throughout the novel making it an excellent choice for introducing Holocaust topics to young readers.  Word is that Susan Lynn Meyer is writing a companion book which continues Gustave's adventures.

Black Radishes has been give the following well deserved honors:

This is book 12 of my Historical Fiction Reading Challenge hosted by Historical Tapestry.
Posted by Alex Baugh at 7:16 AM