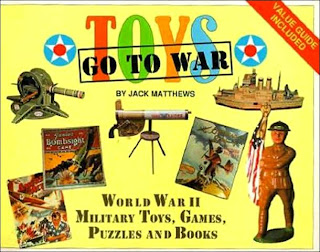 My original interest in World War II began with children's books when I was working on a project about books published in the 1930s and 1940s.  For that project, the stories all had to be written during that time period and had to be about how the war impacted the lives young people for young readers.  Pretty much the same perimeters as my blog.  In fact, I called this blog The Children's War because the Second World War impacted the lives of children more than any other modern war ever had.  Millions of people, including children, were moved through evacuations, resettlement or transported to concentration camps right from the beginning and in some cases, even before the war began.

I managed to amass a large collection of books to meet my criteria from England, Germany and the United States.   But, given my love of pop culture, it didn't take long for my  interest to spread into other areas.  Before I knew it, I was looking at comic books, rationing, knitting, and, inevitably, toys that were also part of the experience of young people during the war.

So I sent for a copy of Toys Go To War, not because I wanted to start another collection, the books were quite enough, and besides that, I couldn't afford to think about toys financially and there simply wasn't room for that in my house.  So I content myself with looking through the pages of Jack Matthews Toys Go To War.
Here is a wonderful book that gives a pictorial, often anecdotal history of World War II toys, followed by chapters devoted to various kinds of toys.  The chapters are divided by the kinds of toys or pastimes under discussion.  There are chapters on puzzles and books, wooden toys, toys obtained by collecting cereal boxtops and toys that are put together by the owner, among others.  And one example of the kinds of anecdotes included is the one that tells how God Bless America is substituted for Gesundheit whenever someone sneezed, because Gesundheit was an enemy word.

Since most factories were turned over to war production, and metals, rubber and paper used for making necessary munitions, there wouldn't seem to be much left for childhood entertainments.  And yet, toys and games were produced, most of which were designed to instill/reinforce a sense of patriotism in kids.  Cardboard planes, tanks and even soldiers could be found under a Christmas tree, paper dolls became even more popular then previously and books were printed according to the war economy (which means that today the pages are quite browned and brittle - some of an older cousins old hand-me-down Nancy Drew books are from this time period and can't even be opened anymore with extensive damage to the pages.)

This is a great book if you are interested in what kids played with or even how kids were propagandized into supporting the war.  There is a small valuation guide at the back if you might want to start collecting, but I think the main purpose of this book is just to see what kids played with during this most difficult of times and maybe even a walk down memory lane for the author.  Matthews also includes, as you will see, some of the German games that are really not so very different from the games produced for American and British children (German books for boys and girls are not so very different either.  They were nothing like I expected them to be.  For the most part, they were just patriotic stories, but not the kind of virulent anti-Semitism I had expected.)


Some example of what can be found in Toys Go To War:


The book is recommended for readers age 10+
This book was purchased for my personal library.
Posted by Alex Baugh at 8:22 PM