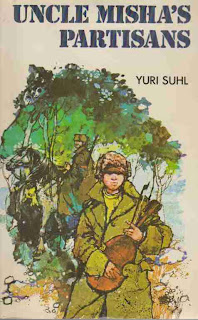 If you think that Europe’s Jews passively met their fate during the Holocaust, then you are seriously misinformed. There were a number of known occurrences of organized resistance, as well as who know how many individual acts of resistance that also took place. One of those who spent a great deal of time researching and studying cases of Jewish Resistance during the Holocaust, beyond the most well-known of these – the Warsaw Uprising – was Yuri Suhl. He has documented those cases of partisan activities in his non-fiction work They Fought Back, a very worthwhile book for readers age 14 and up.

Mr. Suhl also wrote the novel Uncle Misha’s Partisans about a group of Jewish fighters living in a Zhitomir forest in the Ukraine.

When 12 year old Mitek comes home from his violin lesson one day, he finds his mother, father, and beloved sister Basha have all been shot to death by Hitler’s Einsatzgruppen, or death squads.* He decides to run away and find the group of armed Jewish resisters he has heard about called Uncle Misha’s Partisans. On his way there, the Luftwaffe flies overhead spraying the area with a shower of bullets. They are after the two partisans, Yoshke and Berek, who have just blown up a German troop train. The two men find Mitek, but are hesitant because his name is Ukrainian and he speaks that language fluently. His family, he explains, had passed for being non-Jews until someone found out the truth and reported them. The men take him to the camp where the partisans live, where he can once again be Jewish and go by his Yiddish name Motele.

Yoshke takes Motele under his wing and introduces him to everyone, including Uncle Misha. Even though Motele wants to be a partisan, he finds he must work at the camp, at first with Avremel in the supply tent. There he learns how to care for weapons, including the Vyntovka or Vintovaka, a high powered military rifle which Motele covets as a symbol of a true partisan. Motele loves camp life and quickly grows very attached to Yoshke. He is taught some of the songs they like to sing there, figuring out how to play them on his violin, providing much appreciated entertainment to the partisans.

Not long after settling in, however, Motele is allowed to go out on a mission with Yoshke and several others including a nurse named Luba. They are transporting a seriously wounded partisan to the family camp where there is a hospital and a doctor. Hidden in Motele’s violin case is a Vyntovka. On the journey, they are forced to stop at the house of a village elder. The elder is out, but his wife lets Luba in. She finds the house is filled with furniture, clothing, jewelry and other items, which the woman proudly shows Luba and explains the things were taken from the homes of the Jews in the area that have been shot by the Einsatzgruppen. Sadly, by now the wounded man has died, so when her husband returns, the partisans take him in custody, tell his wife to get their two girls out of the house quickly and as they depart, they blow it up.

Unfortunately, Motele ends up in the family camp hospital himself after suffering a case of “forest” a mystery disease involving high fever and chills. At family camp Motele befriends Chanele, a young girl who with her sister Surele had been rescued by Avremel. The two become very close and she teaches him the Partisan’s Song so he can play it on his violin for everyone’s pleasure when there is a wedding in the camp. His growing friendship with Chanele and his new job with the blacksmith cause Motele to have mixed feelings about returning to Uncle Misha’s camp or staying at the family camp.

The decision is taken out of his hands when Yoshke arrives in family camp to bring him back to Uncle Misha. There Motele is told that he is to be disguised as a Ukrainian beggar in a nearby town where the Germans have set up their regional command. Motele is to find out where the administrative offices are, how well they are guarded and when the guard is changed.

But Motele plays his violin so nicely that a German officer takes him to the Deutsches Offizieren Haus (German Officer’s House), a place for German officers to eat, drink and talk. Motele is told he will be playing there everyday for 2 hours afternoons and 4 hours evenings, along with an aged piano player.

Motele doesn’t like this, but is told Uncle Misha is delighted. Motele is told to study the insignias, unit numbers and rank of the various officers as well as listen to the conversations around him, particularly about any troop trains going through. Everyday, he is to report what he knows to their contact Keril, who will relay it to Partisan Headquarters in Moscow.

Eventually, as he becomes more of an accepted fixture in the Officer’s House, he is told to look for an empty room and measure it. Then Motele is to slowly dig a hole in a wall there where bombs could be put. Next, he is to sneak bombing equipment into the house, and set it up to go off one night when there officer’s are all in the house. Does Motele succeed or will he go down in partisan history as the youngest partisan to die for the sake of the resistance?

Motele’s two missions make for very exciting, tense drama and Suhl’s in-depth descriptions show his knowledge of the subject of partisan resistance. Uncle Misha’s Partisans can be a little slow at times and then very exciting at other times, but taken as a whole it is certainly worth reading. However, I think the picture of the partisan camp is more realistic that that of the family camp. The family camps, because of their size and nature were more vulnerable that the smaller partisan camps, which could be moved more easily whenever necessary. Partisan life was hard and extremely dangerous, though admirable. And it is most definitely an overlooked area.

This book is recommended for reader aged 12 and up.
This book was borrowed from the Juvenile Collection of the Hunter College Library.

More information on Jewish resistance in World War II may be found at the following websites:

They also have an essay contest for students in 8th grade and up on the theme of “The only way for evil to prosper is for good people to do nothing” and how that relates to the Jewish Partisans. The deadline is, unfortunately, close: May 11, 2010.  For details see and a downloadable poster see:
Jewish Partisan Education Foundation - Contest 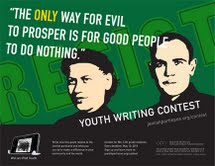 *Einsatzgruppen really translates to task squads, groups or forces, but because of their atrocious activities they became known instead as the death squads.

This is book 6 of my Forgotten Treasures Challenge hosted by Retroreduxs Reviews
Posted by Alex Baugh at 8:25 AM