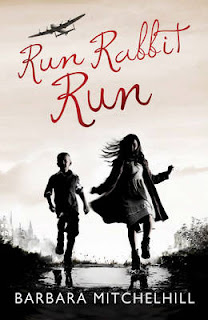 There are not too many books written for young readers about conscientious objectors. Dorita Fairlie Bruce included a character who was a CO in her 1944 novel Nancy Calls the Tune. In 2003, M. E. Kerr wrote Slap Your Sides, a novel about a no longer very religious Quaker family whose eldest son refuses to fight in World War II. Laurel Lee Gugler wrote A Piece of Forever in 2008, a postwar story of a young Mennonite girl whose non-violent beliefs come into conflict with Veteran’s Day celebrations at school. And in 2010, Sharon Schnupp Kuepfer wrote Little Pennsylvania Dutch Boy: will the war ever end? The story is based her father’s experiences as a young Mennonite boy whose father was a conscientious objector. For most, the character's beliefs are part of their religion.

Now, Barbara Mitchehill has written Run Rabbit Run about a father’s ideological decision not to fight in the Second World War and the impact this has on his family. The story begins in 1942. The war is in full swing and patriotism is running high. William Butterworth’s appeal for an exemption from military service has just been rejected, and. without that exemption, he faces arrest and prison unless he enlists. Now, William is forced to go on the run, but still very determined to keep his family together, especially since Lizzie, 11, and her little brother Freddie have already lost their mom when a bomb fell on her shop and killed her,

Lizzie actually doesn’t think running this is such a bad thing. She has been taunted by the kids in school because of her “conchie” dad and she would also like to get away from her odious Aunt Dotty.

Early one morning, the family leaves their home in Rochdale, Lancashire, traveling to a place called Whiteway in Gloucestershire. There, they are welcomed by people willing to provide them a refuge. At Whiteway, they stay with Arthur Hollingworth, a World War I veteran who turned against war after seeing most of his friends die in the trenches breathing in mustard gas.

Life is pleasant at Whiteway and Lizzie is happy; she has even found a best friend in Bernardo. On her birthday, Bernardo talks Lizzie into sneaking off to a fair 9 miles away, promising to get her back in time for her special tea. He takes his mother’s bike without permission and off they go. The day is fun, except for some trouble with 3 boys from Bernardo’s school. Later, the boys find the bike, and break it, forcing the already late Lizzie and Bernardo to walk home. Not far from Whiteway, they are met by Lizzie’s angry dad. They are spotted by an old man, who reports Williams to the police.

The family is once again forced to run; this time to a farm, working along side two kind land girls and a very cruel farmer. After Lizzie and Freddie play a painful prank on him causing his hand to get caught in a rat trap, the farmer waits until winter, when it is cold and he doesn’t need so much help, before calling the police on William.

Once again, the Butterworth family is forced to run, this time in a blizzard. But when Freddie gets sick, they must seek help and a doctor is called. The doctor is required to report William to the police and, this time, William decides to give himself up when they come for him. While he is sent to prison, Lizzie and Freddie are evacuated to South Wales. But their adventures are far from over.

Conscientious objectors, or conchies as they were disparagingly called, were generally considered cowards by most people, regardless of their reasons. William simply does not believe in war, as he told the doctor “I don’t agree with the war, doctor. I won’t fight. I won’t kill…” (pg 135) Conscientious objectors were ostracized, called names, shunned by their families, refused help if they needed it. Ms. Mitchelhill does an excellent job at depicting this treatment without overwhelming the readers. By the same token, she does show that occasionally people could also be compassionate. In the face of overwhelming opposition, it can be hard to stand by your convictions when everyone else is registering to fight, and you are the lone person registering as a CO, knowing what will follow. I liked seeing the experiences the Butterworth’s through Lizzie’s eyes. She was at an age of turbulent feelings, one moment thoughtless, the next angry and sometimes breathlessly poignant. In the end, she opens up questions about the nature of courage and our ideas about what is a hero. Is it person who picks up a gun and kills for his country or the person who refuses to pick up a gun but can still save lives or is it both of these people?

Run Rabbit Run is a well-written, emotional story and it is a book I highly recommend, though sadly it is not yet available in the United States, but hopefully will be soon.

Run Rabbit Run is recommended for readers 9 and up.
I received my copy of Run Rabbit Run as a courtesy from the author, Barbara Mitchelhill.

This is book 4 of my British Books Challenge hosted by The Bookette
Posted by Alex Baugh at 9:18 AM