Today is John Lennon’s 70th birthday. There are two things I have always loved about John Lennon – his music and his sincere anti-war belief. John raised my awareness about the damage caused by war when I was very young and it has stayed with me always. And passing on that awareness is the reason why I write a blog about the portrayal of children in World War II books for young people. I don’t believe that war is ever good, but sometimes it happens and it is always devastating. World War II was a particularly destructive war because it was a total war, and total wars involve total populations, including children. And in the case of this war, that meant lots of kids, as well as their families, their friends, their homes, their schools, their churches, their sense of safety and security. As Winston Churchill told the House of Commons on 20 August 1940:

The whole of the warring nations are engaged, not only soldiers, but the entire
population, men, women and children. The fronts are everywhere.

So as I read and write about World War II, I think of John Lennon’s words

Imagine all the people
Living life in peace

and hope we learn from what we read. 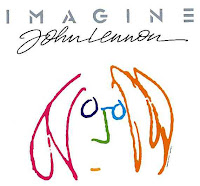 You may call me a dreamer.  But I'm not the only one.
HAPPY BIRTHDAY, JOHN
Posted by Alex Baugh at 12:08 PM