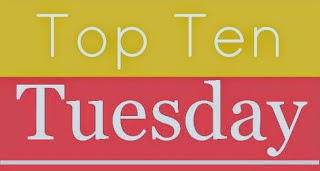 This week's top ten topic is the top ten books read in 2015.  I've read more than I've blogged about this year, but I did review my favorite books, although picking a top ten was really difficult.  Anyway, here are my picks, in no particular order:

The War That Saved My Life by Kimberly Brubaker Bradley

I loved Ada spirit and determination to save herself and her younger brother from the blitz and their mother despite her severely clubbed foot and never having walked before.  Some people thought the ending was too pat, but if you really think about it, it is plausible.

The Boys Who Challenged Hitler:
Knud Pederson and the Churchill Club by Philip Hoose

Can a few people make a difference in the face of ruthless tyranny?  You bet they can, as these young Danish boys prove in their efforts to sabotage the Nazis that occupied their country in any way possible during WWII.

There aren't books for young readers about the Jewish refugees from Europe finding refuge in Cuba.  Engle lyrically tells the story of Daniel, 13, a refugee, who befriends Paloma, a Cuban whose father has the power to grant or deny visas to those wishing to enter Cuba, and David, a Yiddish speaking Russian and the events that surrounded Cuba from 1939 to 1942.

Five Children on the Western Front by Kate Saunders

This is a sequel to a book by E. Nesbit written in 1902 about the adventures of five children and a Psammead.  It begins in 1914, WWI has begone and the children rediscover the Psammead.  And while the Psammead provides some humor, the novel is really more about how the war impacts the each family member.

A Prince Without a Kingdom by Timothée de Fombelle

A sequel to Vango: Between Sky and Earth, it brings the mystery about who Vango is to a satisfying conclusion, but not before lots of adventure, intrigue, suspense and a little romance.  It is a big book, as was the first volume, but oh, so worth the read. 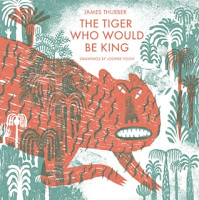 The Tiger Who Would Be Kind by James Thurber,
illustrated by Joohee Yoon

This is an old James Thurber fable about the pointless of war that I remember reading in high school. What put it on my top ten list is the incredible illustrations by Joohee Yoon, using only a palette of green, orange, black and white to create some wonderful boldly expressive images, giving new life to this old tale.

This is a story of friendship between two girls in Auschwitz, and how they helped each other and the other girls in their barracks survive.  Told in verse and in alternating voices, readers learn about their families, their lives in Auschwitz and the one risk one girl makes for the other.

The Emperor of Any Place by Tim Wynne Jones

This is the book that surprised me the most.  I'm not a fan of zombie tales, but Wynne Jones created a story that was so compelling and so different, I ended up loving it and gushing like a schoolgirl when I met Wynne Jones.  It is really the story of a Japanese soldier, and American soldier and what happened on a south Pacific island. 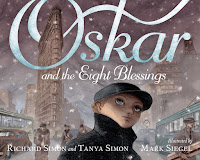 Oskar and the Eight Blessings by Richard Simon and
Tanya Simon

Before leaving Germany shortly after Kristalnacht, Oskar's father told him to always look for the blessings.  After arriving in NYC on the seventh night of Hanukkah, Oskar must walk up Broadway to 103rd Street and the aunt he's never met and who doesn't even know he is coming.  Along the way, Oskar discovers eight wonderful blessings.
Posted by Alex at 1:39 PM